"Looks like the Dog's of war never get to sleep..." 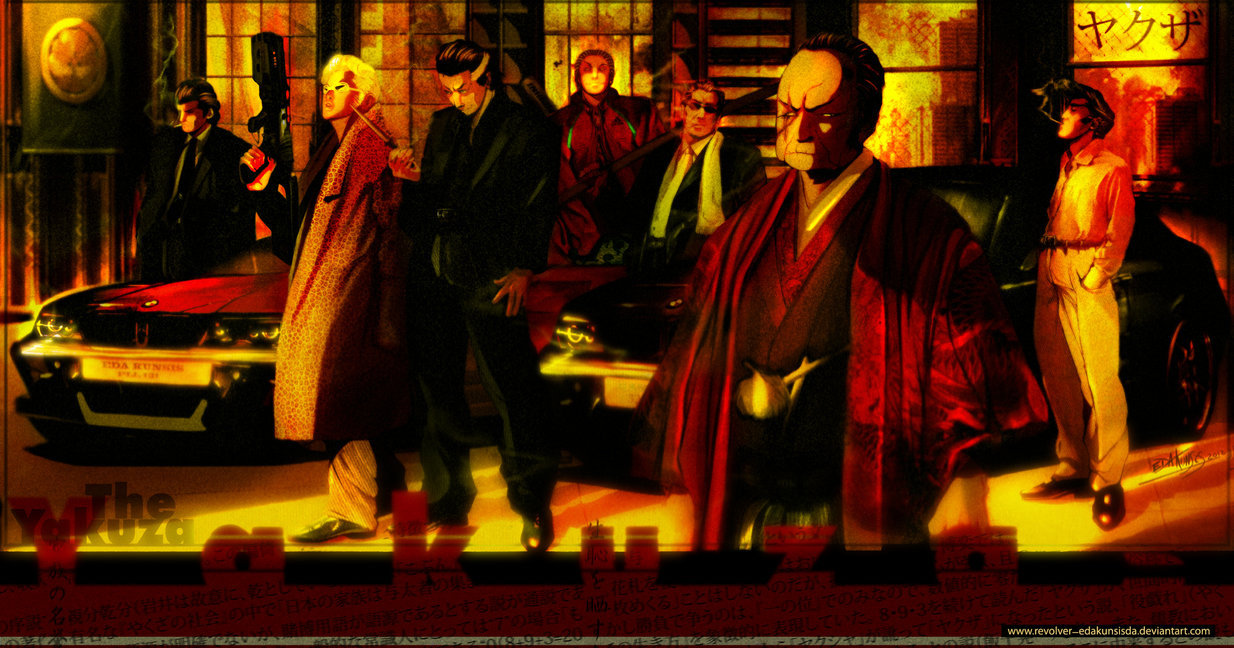 The Notorious Yakuza clan's within Kasaihana city that reign furiously throughout all of the Districts. There leaders all just as powerful. Some twisted, some fair, some pyschotic... some noble. None... to be taken lightly.

Information: Daichi is a sick bastard who cares about getting off to death and everything that has conenctions with it. He's vile, and disqusting. At a young age he was sold as a sex slave untill he killed his captors and fucked there corpses for the revenge he says. It's been stated that Daichi is a serial killer... his facination with The Blue beard fairy tail and his old school seriel killers could easily make this judgement. He's a powerful fighter though, and not to be takin lightly. He possess a deadly trait due to all that he's seen  that enables him to be the "ultimate killing machines". He has the instincts to kill with any means and most effective ways possible, using anything at hand to do so and with no mental problems either before, during or after the deed. Pyschotic Sociopath... In short he's a cold and merciless killer. It's been said that the bastard gives  a murderous aura, inducing fear into people that he makes full eye contact with. Daichi can give off the pure essences of his killing intent, affecting the those around him greatly. Particularly it's been said that with this killing intent he can paralyze his victim in fear, causing them to morbidly hallucinate their own deaths, or even kill them by forcing the mind to believe the death is reality.How he does it... is unknown but he always uses these small needels to do the deed it said. He's an urban Myth. And it's even said that he's beaten Keyome Tasanagi in a hand to hand brawl... and because Keyome Challanged him. A Brother hood had been made. Or so the Myth says. This man is the penical... of loose cannon. His Motives... to leave everything a gore.

Information: Good ol Yani. After his father was murdurded. Yani took up his fathers spot and took the Kagemaru chair by high demand. He continues to push the clan in a wonderful light. Respected by all in the Yakuza world. Everyone loves little Yani and everyone backs him up in the Yakzua and gang world. How he operates the clan it's unknown but every weekend he takes his time to help out charites and orphanges all over. He's really a god sent that boy is. He's not a fighter but his intellect makes up for it. He doesnt believe in fighting and only wishes that everything be done with peace.  Motives.. to bring peace.

Information: Keyth Tasanagi. Wild and brash one of the children to the Notorious Keyome Tasanagi. He's highly unpredictable. Heir to the Kagemaru but this was disbanded after the Kagemaru civil war due to him being nowhere to be found when it first kicked off, a bit after Keyomes death. The Arasumaru had been a clan made by the young Tasanagi earlier on his life when he took on the Multiple gang titles and the such, committing crimes he considered big back in the day. He's not very smart it's been seen and taken into consideration. The KPD dont have a sitch of info on him, which leads alot of people into thinking that he may have ties with them. Over the past weeks he's accumilated the Arasumaru back into full play with an inhuman pace. This one is not to be trusted. His motives are much to unpredictible and he doesnt follow the code well at all. He believes in things going his way. Noble though and Loyal those that are loyal to him. His true motives... unknown.

"My honor as a Yanazuka only fuels my ambition."

Information: Ginsei Yanazuka. Son of Ginsueki Yanazuka... even as a child this one was a one to wonder about. Taught in Yakuza ethics as a young boy. Amongst all of the chairmen now there isnt a man or woman alive that understands the code better than this one. Modest, he is a powerful swords man and with his blade he runs his clan with an Iron fist. Shaped and well spoken. He respects his elders to the eye but doenst take disrespect from anyone. He's cunning and one to watch out for as well. Calm and he never shows an inch of emotion. Cold and calculating. Under Keyomes Tasanagi's wing during his days as the Kagemaru Aniki. He was noted to be a prodigy. A Golden boy. Keyome placed majoirty of his faith into this young and spoke highly upon him regardless of his own son. Suprisingly, he's never had a run in with the KPD. And because of this he doesnt have files on record. Respect amongst the Yakuza world and the gang world alike. He is also loyal but the death of his father is still a mystery... his motives... from what some may know to spread his Ambition across the land. But... Motives unknown.

Threat Level 1 being the lowest 10: Unknown

Information:  This one is an Enigma. Her true intentions are known to none. Quiet and subtle... like a wave of ocean water. None have ever questioned her motives. She is highly respected, and she has to be. Her clan is in a way connetion to all clans. No clan cant say they havent used her clans services in there intel work before. There respected highly. But are they trusted, is she trusted? Well I guess that depends on the person.  No issues with the  KPD on her rap sheet either but she to will be watched. No one suspects a thing outta her but some know different. Because of her large intel connect groups, everyone speaks lightly to her. Yet some may understimate her.... that would surely be that ones downfall. Cunning and intelligent. Her life has made her harnded like stone to those that stand in her way. Her motives... unknown.

Threat Level 1 being the lowest 10:

Information: Once the Aniki to Hitmoi. She branched of and began to recenter herself around the Chitori clan. Taking it over and coming in control of the medical institutes completely. Harumi has no last name and her motives are simple. She wants to run District 2. Despite her calm nature she's been noted to be a brutal tactioner in combat... and she's never lost a fight. And she was the one who gave James Farhan the message about Keyth Tasanagi's babies mother going missing... some say she may have had something to do with it after she grew an obsession for the young man once she met him, and he avenged his old chairmen after wild card killed her.  One cant stress enough how smart this young lady is. She has an intelligence that is significantly above standard genius level intellect. So gifted that  she has  higher mental faculties such as a an extremly powerful memory. She never forgets a face. She has better calculation skills, greater reasoning skills, and a more superior learning capacity.

Information: Haru... aka Purple. Local sleezebag. And an asshole to all those but women. He only deals in women. He sleeps with women, draws women, drinks women, breathes women. This man cares for nothing but women. Isnt it obvious? He's pretty smart though. A Lover and not a figher he hires the Maru Jeitai to do his fighting for him at the moment thanks to his Deals with Yani Farhan. This guys loaded with money. And it's said that he might be one of the richest guys in the city. Motives.. to create the biggest host club in the world. What an Ass..

Kenji Tadashi is very friendly but can be a complete asshole when people get him to that point or whenever he has his mood swings, which seems to happen quite a bit lately, and when it happens, it could either go from exchanging words to smashing someone's skull in with a wrench.Even though he has mood swings, while growing up, Kenji his parents had thought him to always treat everything and everyone with Respect, even if he was about to lose his cool, he always respects everything and everyone. (Except when he loses his cool, then he just stops thinking.)  Kenji has his own vision on the Mob underwold, being the Oyuban of The Tsukyo Clan, his main dream is to rise to the top and he sometimes will state this in his own words. To Kenji in The Tsukyo Clan he has three words for himself and his fellow clan members, the three words are: "Loyalty, Devotion and Duty." He believes that only by following these three words, he can keep the order and peace between himself, his clan and the other people in the city.  His motives... to run a proper system one day where the city will flurish properly.

Information: Ishin Takeda is rarely seeni in public, unless he feels need to go out. As such, little is known about the man in general. He is an enigma, so much so that he had his own personal bio written out to be as such: growing up he had no parents. According to sources he just "appeared" on an orphanage doorstep, and was raised from there. He always had  thing for video games, namely the Tekken series, his favorite character was Jin Kazama. As such he was very much influenced by the character, personality wise and would often immitate him. While this attempt was frail, it became permanant, when one day his orphanage forgot to pay thier protection fee...and the institution was burned down as a result. Ishin was shot in the head, right in the temple, and was thought to be dead. yet he survived, but with a certain condition: he is incapable of feeling emotions. Weather it be suprise, anger, happiness or sorrow, he is incapable of expressing his true feelings. Some say this is a weakness, while others, himslef included, say this is his strong point. He can judge, deduce, and calculate any situation withouth the need of moral coding or choice. Even death doesn't phase him, nor any gruesome sight. As a chairmen he runs his clan like a business, taking advantage of a business no one else in the city thought to. Imports and Exports, aong with stock market trades. Any trading that takes place in Kasihana city, or even across the seas, you can bet his name will be whispered somewhere along those lines weather it's a contribution or a recivement. Other than that no one knows  him personally. Some say he can levitate things with his mind but this is a rumor. No one..alive anyway..has seen it happen. He puts image over everything, and will not tolerate looking bad infront of his clan, or "peers" if you can call them that. No one knows if he even has an Aniki. He keeps his nose clean, and has never once had an issue with the KPD or even a hint of suspicion. He beilves in effciency above all things, and that any member of the Yakuza family should be ready to die for the cause. Those who aren't don't even deserve to live in this life, let alone in the Hoshimaru clan. His motives are simple, and be found in a quote he says often. "It is a fact of nature that only the strongest will survive. Life is a struggle. The strong win that struggle. The weak lose. The Yakuza, my good fellow, is no different. The fittest and most capable are ment to survive. This is what maintains our status, and it is percisely why the morals of humanity itself should leave warriors like us alone and let "Nature" take it's course..."
Retrieved from "https://yakuza-mob-roleplay.fandom.com/wiki/Yakuza_Chairmen?oldid=24781"
Community content is available under CC-BY-SA unless otherwise noted.