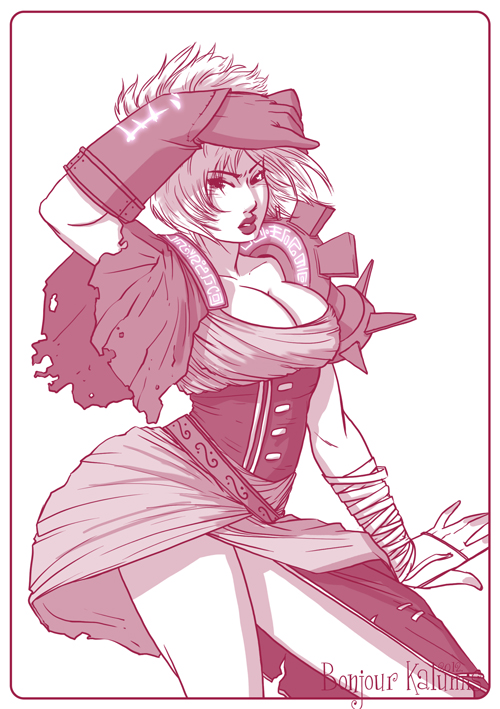 Around the year 1200 B.C., a small group of female Olympian gods desired to create a nation of warrior women that would help to spread their ideals to the world. Met with disinterest or opposition by most of their male counterparts, the goddesses Hestia, Aphrodite, Demeter, Athena and Artemis convened in the land of the Underworld. There, in the Cavern of Souls, were kept the spirits of all women who had unjustly died at the hands of a man. The five goddesses combined their powers to grant life to all of the souls -- with the exception of one, whom they decided would have a special future purpose.

The Amazons were to serve the Olympian gods in proselytical manner, spreading their principles and devotion to a largely barbarian world. They were given a city-state in Greece (the land adjacent to the lake of their birth), and they called it Kun'jaw There they thrived for many years before they were attacked by the forces of Hercules, and were saved only through the intervention of the goddesses.

Their home destroyed and prospects for success in their worldly mission dashed, Antiope led a portion of the Amazons away from her sister and the influence of the gods, to travel the world in search of a new purpose. They eventually settled in On an island not to far off from the original which later became Ta'lo.

Most Amazons, however, stayed with Iloyus. To repay the gods for their rescue, the remaining Amazons were sent far away from their home in Greece to a mystical, paradisal island in uncharted oceans. There the Amazons took up a new gods-given purpose -- to guard the Earth from a terrible evil buried beneath the island. Which had become Kun'jaw.

Athena-  Some still worship the old ways with Athena being there god. Even despite her no longer blessing the Trinity isle, they still belive that they will send a champion to save them from the countries ending doom. The Clan of Kun'jaw mostly belive in this god but others from other more suprisng clans may also belive in her.

The Amazons were gifted immortality. The people of Trinity Isle lived forever, though could be killed in war or in an accident. Those who followed Antiope and Phthia and became the Bana-Mighdall lost their immortality.

So long as the Amazons stay in The Isle, they  do not require food, water or any other form of nourishment to maintain her health and vitality. Although they are not susceptible to the throes of hunger, this does not mean that Amazons don't consume food for enjoyment. The Amazons frequently hold great festivals wherupon food is served.

Retrieved from "https://yakuza-mob-roleplay.fandom.com/wiki/Usagi_%22The_Light%22_Shiro?oldid=49860"
Community content is available under CC-BY-SA unless otherwise noted.