Here's how it is in a nut-shell

The Ryoji Family - Knights of Justice... Eagles that Fly...Edit

1 of 3
Add photo
The Ryoji Family, a family based on moral values. Taking care of one another. And assimilating enemies for the sake of family; of course. Ah yes, there is no family like the Ryoji Family. When they're not being experimented on by their genius grandfather, they're typically out saving the world. Or... Consuming people with snake things ( Leon >.> ). The family is well established, however their roots are unknown. They were said to be once very powerful agents for the government; tools. But much about them has been eradicated after WW3. As of now, The Ryojis mostly do as they please, but also care for those that are around them. Heroism is a main factor within this family. Stepping in to protect justice is their second nature. The doting question always arose, as to where the Ryojis originated. It's not hard to figure out that their origins are Japanese, and their family line started in the fudel era of Japan, but it was fate that spread their family name throughout the world. Conversely, not to the public. Their powers are secret, a motton the Ryoji family to this day, is a staple for. (Family page coming soon.)

The Tasanagi Family - Ronins of a broken blade... Wolves that howlEdit

The Notorious Tasanagi family. Now feared in the Mafia and gang world. This family is based not so much on family values like the Ryojis. They typically go head to head with one another more than their enemies would. This family flourishes in dark secrets, death, and demonic accusations. Little is known about their background as well. As far as being known as a powerful mob family, the rest is a mystery. But... if you see a Tasangai, it's best to stray away. They aren't people you want to fight. Beware the golden eyes..

But to understand the full story... one must venture beyond...

The Creed Family - Jesters that don't laugh... Owls who strikeEdit

The spontaneous, out-going, colorful family known as the Creeds. Their family almost seems like royatly when you meet them. It's the aura they give off. But even then, this family is still forced to dwell among a wicked curse; a curse that broadens up the statement: history repeats itself. Since the beginning of the Creed Period during a long lost time which gave birth to a continent once known as the Dark Continent, the colony was ran by Ralph Lane after Sir Richard Greenville who had transported the colonist to Virginia and returned from Britain for supplies. The Dark Continent was once known as Roanoke, a Colony founded in 1585. The Colonist were not very prepared and knew little, thus why they felt the need to patronize the Indians that already inhabited that land. They kidnapped them and held them hostage for information. This did not sit well with the Indians so it was then they went to the Owl God Strix. He was the smartest of them all and he taught the Indians the way of civilization. He chose only one to rule. This man's name was Bunkai Creed; thought to be the weakest of the tribe, but Strix had faith and so the Indians said nothing and followed him. Sir Francais Drake feared for the lives of his colony and sought to bring them back to England, leaving 15 of his men behind who no one ever heard from again. Here is foreshadowed one of North America's greatest mysteries. Roanokes so called 'Lost Colony' of 90 men, 17 women, and 9 children, were never heard from again. All that was found was the word 'Strix.' And so our story continues. Bunkai Creed remained king of the Lost Colony which suddenly disappeared from the map. It is said to only be seen once the moon has turned its dark side over to the colony. Though that's never been proven to be true, the real reason they had vanished is because they chose to carry out their civilization underground, where Bunkai Creed was in control with Strix at his back. The 90 men, 17 women were all sacrificed to him, while the 9 children were forced to share Indian blood. Due to this sacrifice, the Creeds learned all there was to need to know about civilization, and thus a few centuries later they were brave enough to expand their kingdom in a higher level. With Strix on their side they remained untouchable. It wasn't until several years later that Lancose Creed ruled what is now known as the Dark Continent. He was married to Lyla Creed, and they had a son named Arthur. King Creed also had a bastard child to a female Jester whom held a son. After Lyla discovered this, she ordered King Creed to have that woman, the child, and her whole village slaughtered. The village was pummeled but the woman and her son survived because the King had his most trusted soldier evacuate them. Years had passed and both boys had grown to their teen years; Arthur turned into a fine young man and wanted one day become the greatest knight. As for the bastard Creed, who was given that name due to being exactly that, he wanted to take the power his father had refused to share with him. Creed took in a sacred worship known as Alchemy. This included him and an under ground group known as the Saints of Juda. They meddled with stuff humans shouldn't reckon with and had Strix suffer the consequences. Unfortunately, Creed gained enough power to slaughter Strix. After the death of Strix, King Creed became sick and his last wishes were for Arthur and his brother to bond. Creed fooled his brother and the kingdom long enough for him to slaughter Arthur's mother. He then had Arthur accused of planting the weapon. Even then, as Arthur was rotting in his cell, he was ignorant to how evil his brother really was. Arthur was visited by his deceased father and Strix, who provided him with the knowledge of Creed and his deeds. (Hahaha that rhymed.) Strix gave Arthur what was left of him; enough power to break from his chains. Unfortunately, this came at a price. His soul was to rot along side his brother's. This was the beginning of The Stand Physiology. The first two being Tyrants Soul The Rubber Fool along side Knight Owl. The Golden Beetle was said to be one of the first, but is rarely known and fails to amount to the Tyrant and Knight Owl's strength. Arthur escaped the Dark Continent as a traitor to the ones who lived there. It wasn't long until Creed, rather known as Lord Creed revealed his inner Tyrant, slaughtering those who worshiped any other god than him; it soon became a hobby. Arthur rounded his own bunch of soldiers and constantly went into battle with Lord Creed, thus becoming a 5 year war. Lord Creed died along side his brother, both striking a blade at the heart. Since the the Dark Continent died, due to losing two potential leaders, Arthur and Creed's children were never heard of. This is where History Repeats comes into play since Arthur and Creed's souls never quite died. As The Creed generation went by, all those that held a brotherly bond within the Creed family would feel the Ying-Yang affect; one becoming the Tyrants Soul while the other, the Knight Owl. The two who have aquired those souls are forced into somewhat controversy, one dying by the hand of the other. This is the first two of the Creeds, Lucious Creed along with Eden Creed, were known to be their resurrections. One may wonder: will history finally stop repeating here?

Now that you know this story. Enter beyond... into the Creed Saga

The Torabaasu family is a group of relatives who worship Sharks as gods... The sharks respect them due the calming care and spirit of the Oni within each creature. Even though the family all possess blonde locks of hair and sea blue eyes...

Some aren't lucky and will be degraded lower than dirt.. You can say they were spiteful when that comes around and will eventually kill off the brown hair children.. THOUGH... there was one... One that would change all this.. and bringing the Torabaasus extermination..

The Gokkun Family.. Perverts Who Pack a PunchEdit 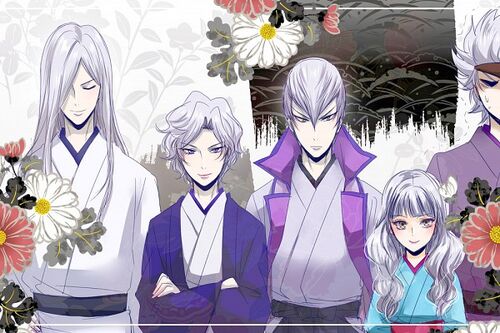 The Yun family is a world famous household name with their highly advanced technology based company named Yun Corp. One thing they have, is an extreme willpower to never give up. And with that willpower, Donnie Yun was able to bring the Yun family onto the map. Being the first of his family to become a Yakuza Chairman, he was able to open up his business and become the powerhouse that he was. He created Super Soldier serums for himself, and even using the advancement in technology that he created, he became a Superhero for Kasaihana City. Through the coming generations, the Yuns have increased their gene pool to constantly hold some of the most powerful fighters Kasaihana has seen. Now in the present day, they have Super Soldiers and Onihorudas in the gene pool. They are the family that hones in the power of the Dragon Demon kind, Garyx, and with the passing years the family just continues to get bigger and better.

The Yun Family Page to come to a theatere near you - But then Keyo leaks the video to the public.

The Tetsus are pretty new to the scene but have made a pretty good reputation for themselves They're rich as hell and make good use of the money they make. This family sticks to themselves, and rarely gets involved in other's affairs; so they're relatively peaceful. Be careful, this families is full of secrets and crossing them or messing with their peaceful life is far from wise. A union made of the principles of two polar opposites, Fire (strength) and Ice (intelligence). This family is a force to avoid both in and outside of the combat zone.

Want to know more about their origins? --> Click Here

Members of the Yoru Family are considered quiet and distant at first glance, but once you get to know them, they're a lively bunch. Like First Generation Yoru, Aki Yoru, the practical Mother of the Yoru family, generations down, each member is an assassin. With each member comes training in both mental and physical states until they reach the peak of what COULD be placed as superhuman (without that Oni and Super Soldier stuff T-T). For both genders in the Yoru family, they inherit this dark brown to jet black color in their hair, but their eye color varies.

"You can't change anything unless you can discard part of yourself. To surpass monsters, you must be willing to give up your humanity." - Aki Yoru

In Yoru Legends, Aki turned herself into a fox and kept watch as the Clan's Guardian. With every passing generation there'd be at least one witness of the claimed guarding, Aki as a white fox with nine tails trailing behind it.

During the 9th and 10th Generation of the Yoru Clan, the current main family is making themselves known, rather than stay quiet and reserved to family like past generations. The Yoru family's path is still strong and at its prime state, though maybe it's not so bad to be just 'out there'. The Main family are very kind people with hearts of gold, but once you get on their bad side, it's hard to get off of it, even if you mess with just one. You mess with one, you deal with all.

Retrieved from "https://yakuza-mob-roleplay.fandom.com/wiki/The_YMRP_Families?oldid=50798"
Community content is available under CC-BY-SA unless otherwise noted.