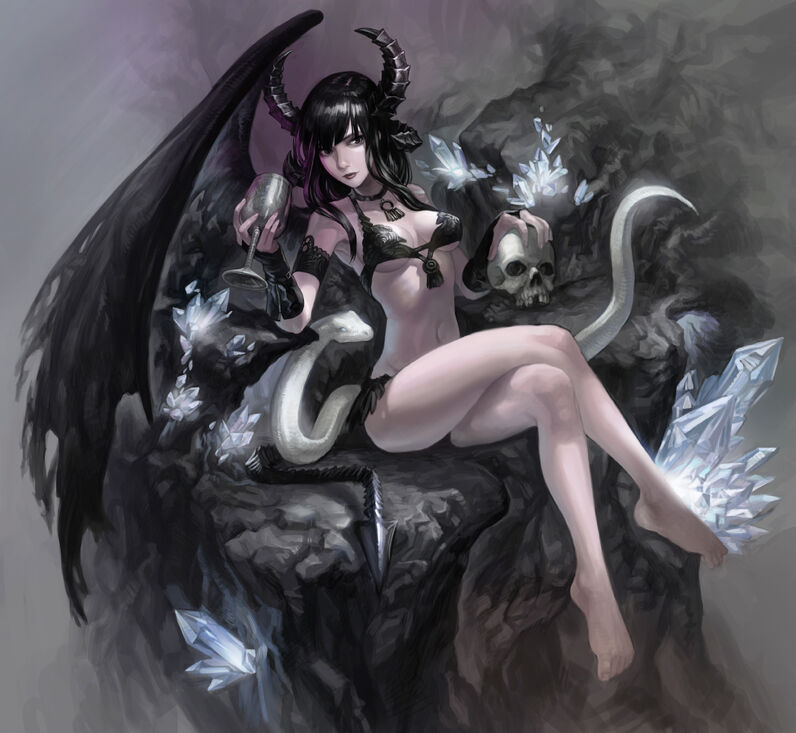 Despite there name. These girls are the complete opposite of Valkries. Crafted from the evil hands of a Chi Sorrcer that Sector Olympus summoned out the Legendary Book Known as the Grimiorie. The Sorrcer crafted these girls out of the Contenders of the Sector Games most and deared loved ones as an attempt at getting another kill on the fighers before they were allowed to face the Deitites. They were made from some of the most darkest creatues within history, demented and twisted. The Succubus...

A succubus is a female demon or supernatural entity in folklore (traced back to medieval legend) that appears in dreams and takes the form of a woman in order to seduce men, usually through sexual activity. The male counterpart is the incubus. Religious traditions hold that repeated sexual activity with a succubus may result in the deterioration of health or even death. In modern representations, a succubus may or may not appear in dreams and is often depicted as a highly attractive seductress or enchantress; whereas, in the past, succubi were generally depicted as frightening and demonic.

Due to the girls morphed form, they can transform into succubus (plural succubi), a female demon or supernatural being that traditionally appears in dreams taking the form of a humanoid woman in order to seduce men, usually through sexual intercourse. Users with this power gain usually boosted strength, speed, supernatural level of beauty and some magical abilities, especially dealing with illusions and mental manipulation. Physical changes include fangs, claws, pointed tail and wings. The girls all have the powers listed below. 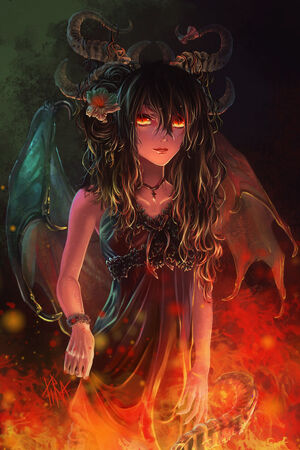 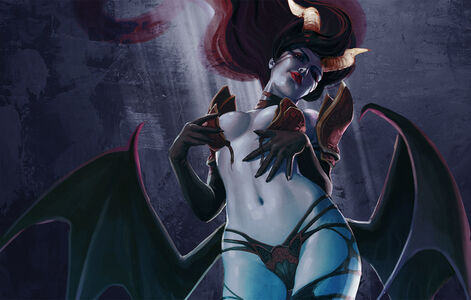 All of the girls were crafted and created the same. The Sorrceror and Yani farhan ( Being the second in command with this project.) Felt like these girls would be more effective if they were just as they are. But with a twist, encoding a hated for Humanity, and everyone that stands for it down to there genetic coding. Giving them a hatred towards all men but there creators and seeing women as breeding cattle. They known all that there orginal counter parts know. From family, from childhood years. They know everything, thus what makes them such a threat. They simply lack emphaty, and when they kill it comes out as an orgasmic sensation. They cant truly be killed, unless by the hands of a Shard of Nirvana only trapped. They could be oblitereated and they could return, trapped within another dimension upon abosrping, or consumption and they could exit by ripping there own dimensional gate. ( Just if Keiz tried to eat you XD ) And they have the ability to come back once they die. However, dying isnt good. Everytime they die, they age. And if they age too much evantually they'll get to brittle and break apart. No man would want them.

The Only thing that fixes this, is if they consume, and they must consume Human hearts to keep there beauty and vitality as a means of survival. Blood, and any organ or limb within the human anatomy also helps but there hearts are the bread winners.

Note that each memebr has there own set of powers. However they ALL! have the Succubus abilites stated above. Have fun with OPness! :D 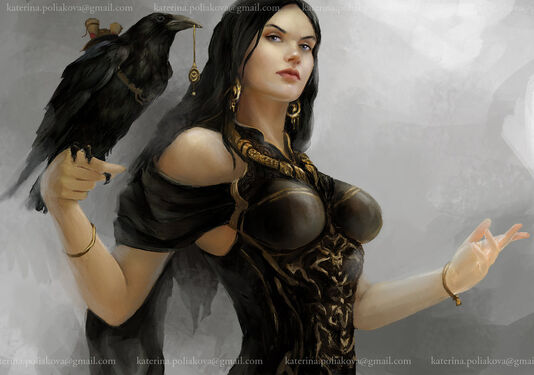 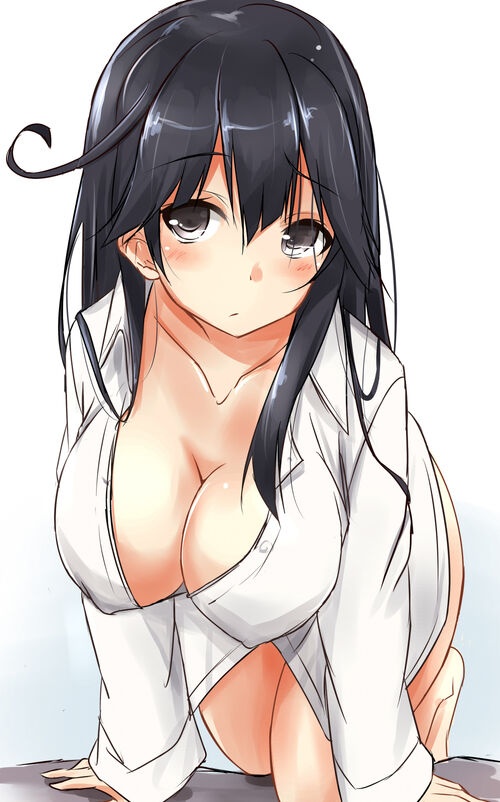 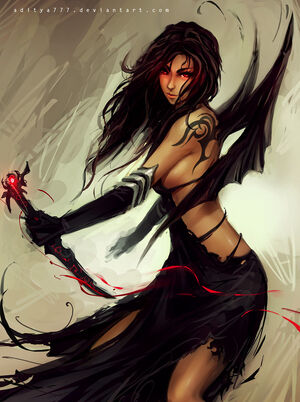 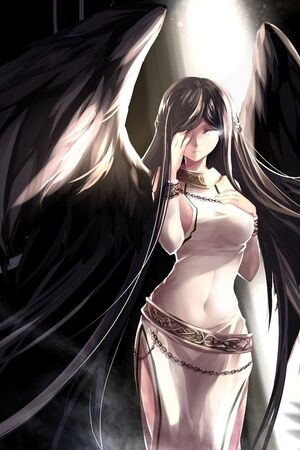 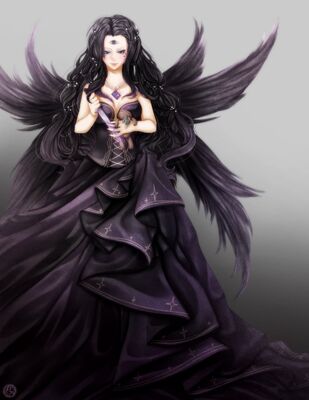 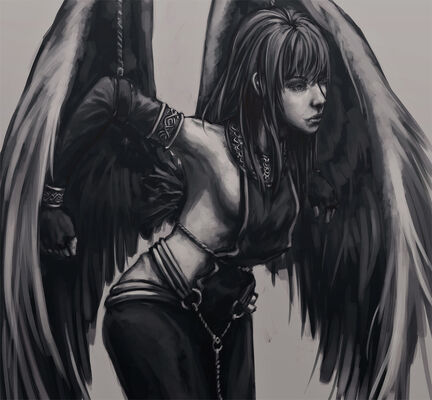 Crow is the Evil Variant of Suzume Yasutake. Suzume in her orginal form lacks the most physical prowess out side of her Oni's powers. Thus why Crow is the most powerful chi wise due to her lack of strength in her other form.Her personality is quite Similar to Suzume's. She's peaceful and oddly enough has a love for children. This one factor being the only thing truly ' Suzume' about her. Outside of that, towards her enemies and mostly everyone else. She's cold and calcuating. Always thinking of her next step and completly sinster.

The user can release/use darkness/shadow to attacks of various shapes and/or intensities, either projected, used as a part of melee attacks, etc. User can create, shape and manipulate darkness and shadows. By itself, darkness is mostly used to cloud everything into total darkness, but by accessing a dimension of dark energy it can be channeled to a variety of effects, both as an absence of light and a solid substance: one can also control and manipulate the beings that exist there, create and dispel shields and areas of total darkness, create constructs and weapons, teleport one's self through massive distances via shadows, etc. The user wields almost supreme power, but they are limited due to a certain element they're missing that limits their power and prevents them from gaining true omnipotence. Despite that missing element, the user wields unimaginable levels of power and can achieve a near-limitless number of effects with their near-omnipotent abilities. 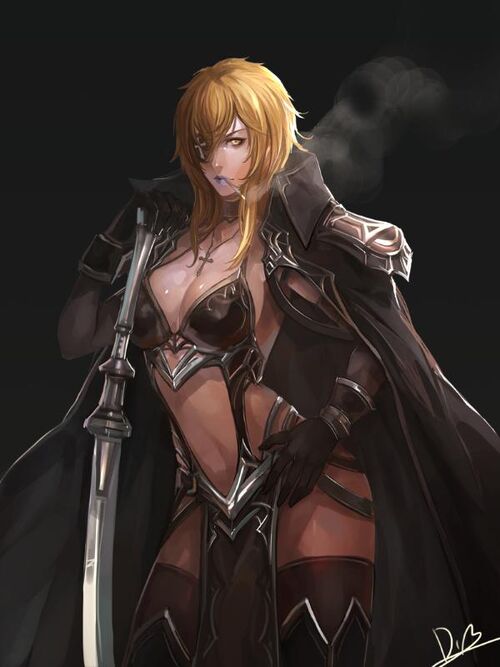 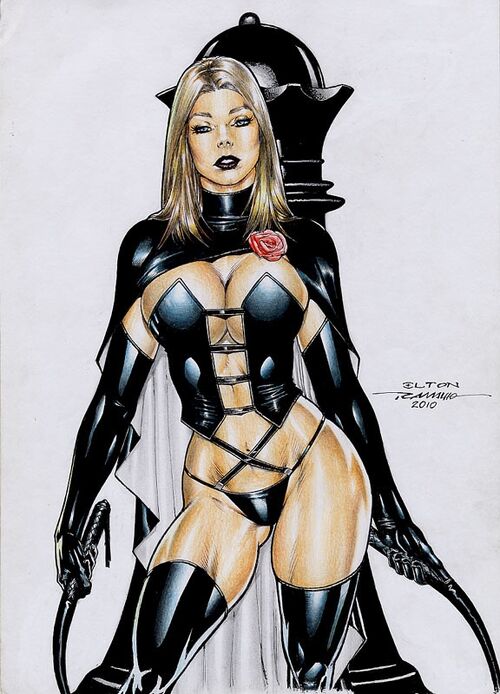 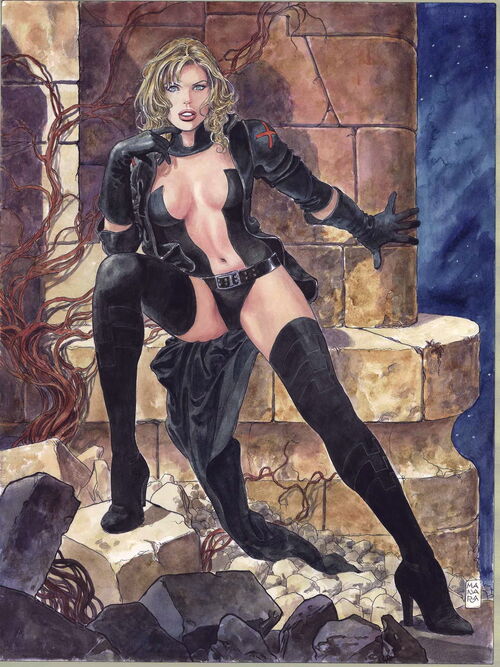 Skylar's personality is quite similiar to Kodi..more of a sadistic type.. Despite she is more twisted. It is rather more of her fathers.. Seductive yet,Venomous.. She is known to manipulate couples causing chaos between the both.. that result to even in death.. Being lustful an brash is a wonderous combination for this demon... even if she is a clone, Skylar has a darker side of her.. that dwells men into her trap.. She has blonde messy hair.. with an eyepatch when she is cloned.. along with a sleeve hiding her "Nub" which is just invisble from her succubi powers thus being covered from her black leathery jacket.... Skylar brings a watery dark aroma around her..  causing to make the men go crazy in lust from the special elixir. bringing them mesmerized almost to the same ways of a harpie.. Though reasons told... Kodi had murdered tons of people  in cold blood murder...which the gods resent her for that such a thing.Even So they are not pleased with the blonde abrasive female... So cloning Skylar as a identical of Kodi.. The succubi  manages to kill they're male target.. syncing them as she "Makes Love" to her target.. Even she can grow shark teeth within her inside her pussy.. bringing there penis's being eaten alive as she fucks them silly..Plus being a dark mercury water bender.. she can manipulate water, and weather.. bringing total chaos to those around her..  Having strong serated teeth similiar to Kodi's though being as tough as titanium.. she could lunge at her targets..along with drowning them with her Dark Mercury Water sending her victims being melted comepletely off the bones of the men... even raping them with clones made from the mercury within the black substance.. causing them to die from being drained of there semen... Even so The lustful demon is out for the prowl.. so they be better be prepared for whats coming to them.. Because Skylars coming on the hunt with a dark seductive danger.. bringing her targets down one by one

User is able to control, create and otherwise manipulate waters that are straight from the darkest fears sentient mind has about watery environments, including all the fears about waters that pull their victims under to drown or slow/trip them. The dark waters are obviously and actively malicious, dark and near sentient. Dark waters doesn't just flood, it drowns everything it consumes, including normal water. 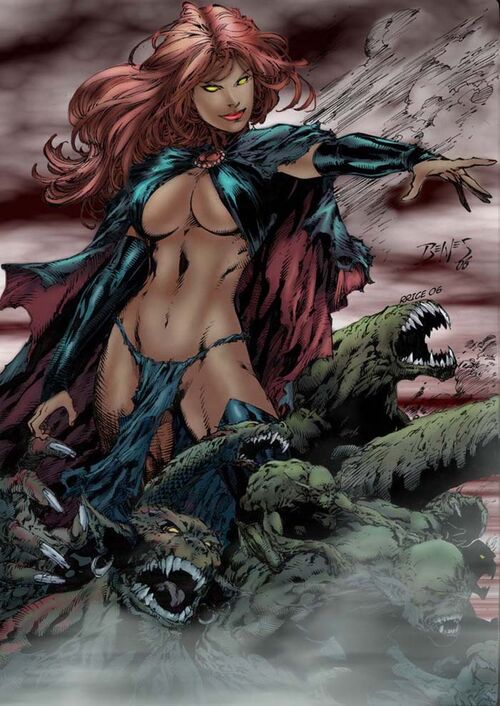 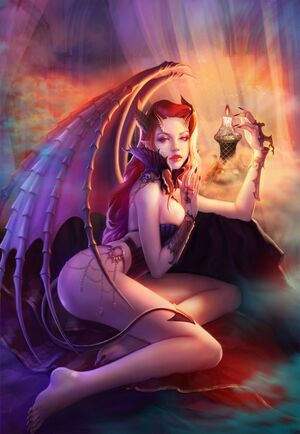 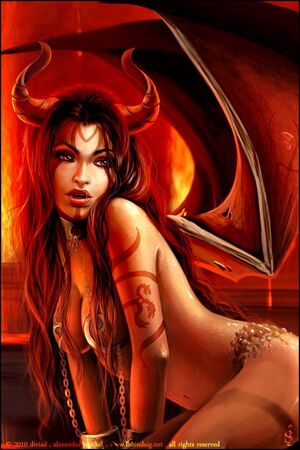 This deadly doppelganger known as Deianira is none other the Evil Variant of Domini Fudo. And like Domini when in her human state she posses the very same powers abilities as the young priestess though with one VERY major difference. As Domini is a servant of the Shinto Gods and draws upon their powers, those of their other servants, and teachings when in the heat of battle Deianira draws her powers from the opposing side of the spiritual spectrum, yep onis. But try not to make her mad because once you do she will change into her Oni state and it is there my friend that the stakes as well as the probability for Death becomes twice as high. Outside of her physical resemblance and her ACTUALLY BEING IN LOVE with Leon Ryoji there's very little that this demonic hell cat has in common with the young miko. Especially behavior wise, as she's about as cold, vain, and manipulating as anyone could get oh and did I forget add she's far from a lady in the streets too.

Powers
The user can create, shape and manipulate theirs or others spiritual power, which is generated by every sentient being that has a soul, or in places with powerful spiritual influence. They can convert it into various forms of energy, manifest it into a solid form, or merge into existing objects. Thus giving the wielder the power in the likeness of a God as they control the very fabric around the existence in the nature of life and death for a living thing's soul. 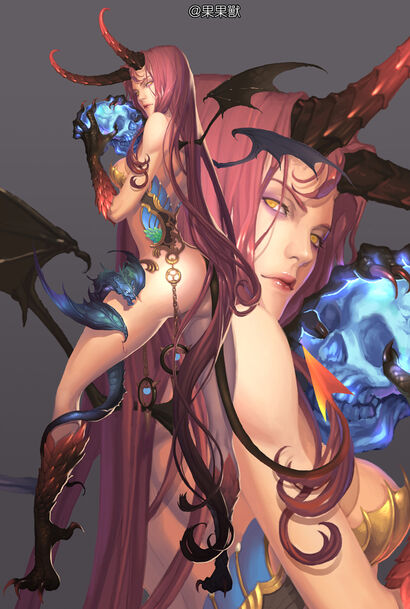 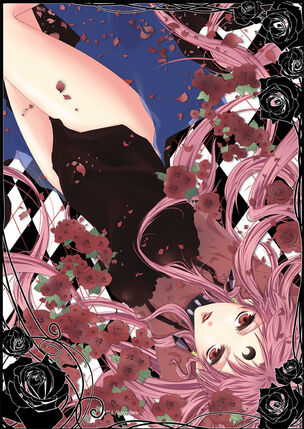 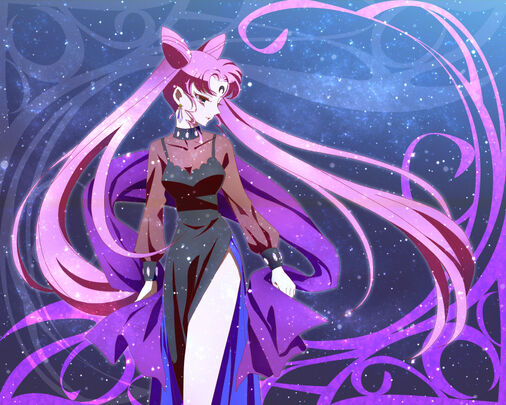 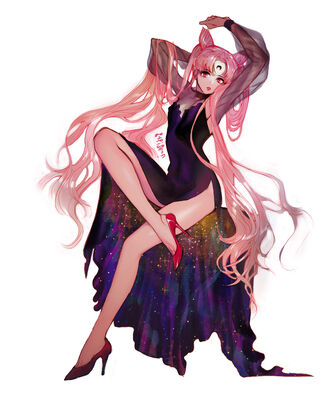 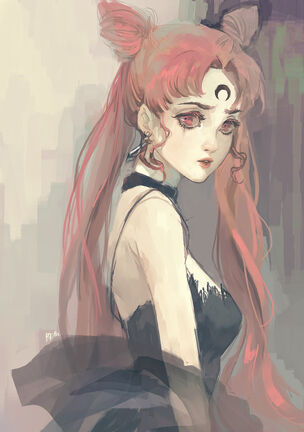 This sucubus was created in the image of Yumi Ikeda, being the dragon halflings evil variant. They look very much alike in facial features, she is Yumi! What draws them apart is instead of long locks of red, it is a dark hue of pink, her eyes the same color pink as well. All of Yumi's sadness, resentment and hatred is what Zerine is made of, possessing all of the fighters memories and sorrows obtained from them. The woman is nothing but a walking force of pure negative energy and she isn't afraid to use it in the form of attacks. While Yumi is prideful she does her best to help those in need and doesn't let people in as far as how she feels emotionally...she isn't very expressful in terms of this. Zerine on the other hand will let everyone know how wrongly she feels about the hand thats been dealt to her, resenting Connor Ryoji for putting the real Yumi through the pain of rejection, taking it rather personal as if she were the original Yumi. Both of them are fighters, Yumi in Muay Thai while Zerine is a master of Tai-chi. She is a demtented more twisted version of the red head in every sense of the word...all she knows is darkness and she wishes to put Connor through the same experience...or simply to put him 6 ft under.

The user has the power to create living manifestations of negative energy and can use negative feelings or behaviors of humans like fear, anger, violence, hatred, doubt, despair. The manifestations can even use those feelings as their own powers.

Retrieved from "https://yakuza-mob-roleplay.fandom.com/wiki/The_Valkyrie%27s?oldid=51737"
Community content is available under CC-BY-SA unless otherwise noted.