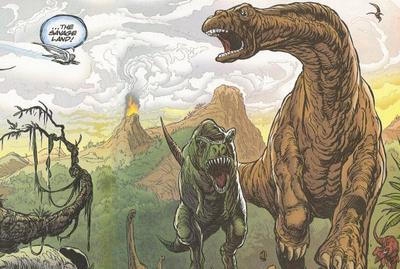 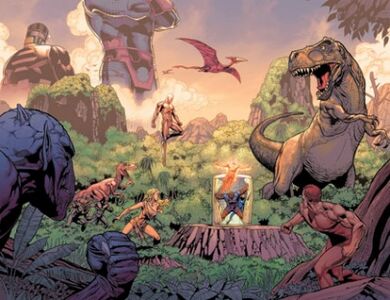 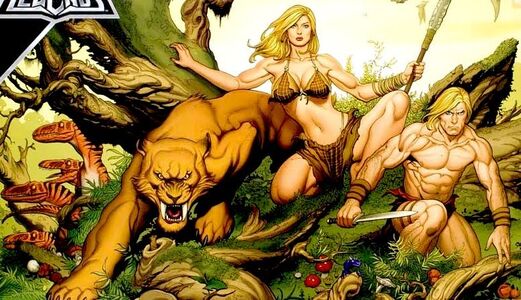 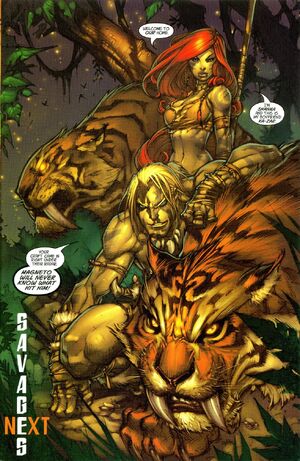 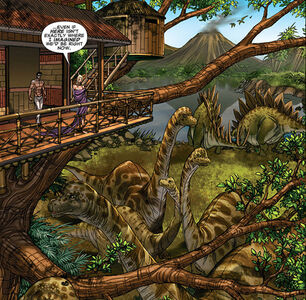 The Bleak Jungle is a tropical region surrounded by volcanoes deep in Antarctica, created over 200 million years ago by the First Civilliazation as one of several planetary "game preserves" for the mysterious godlike Shinto Gods. The First Civilliazation stocked the Land with Earthly life of the era, most notably dinosaurs; as Earth's flora and fauna changed over succeeding millions of years, they supplemented their preserve with prehistoric mammals and early hominids, or "Man-Apes." When Earth's continents shifted circa 50 million BC, the F.C.  augmented the Land's volcanoes to preserve its tropical status. Following the F.C. departure in 200,000 BC, little is known of the Land's history for over a hundred millennia, although a faction of superhuman Eternals dwelled there at least briefly, leaving a temple complex behind. Circa 18,500 BC, it was colonized by humans of Atlantis, who exported prehistoric life throughout their empire while importing unicorns and other mystic creatures. Atlantean scientists extended the tropical effect, creating a recreation/commerce center called "Contux" then genetically altered Man-Apes into humanoid versions of birds, monkeys, fish, and other animals. The beast-people, put to work as laborers, became dissatisfied with servitude and, following Contuxes automation, rebelled in the First Contuxes War and were allowed to colonize unpopulated areas rendered habitable by the F.C. effect.

In 18,000 BC, alien and mystic conflicts resulted in the Great Cataclysm, sinking Atlantis and ending its empire, but the Land and Pangea were protected from inundation by surrounding mountains. The Beyonders, having observed their preserve over the millennia, sent Fortisquian operatives, later called the Caretakers of Arcturus, to repair its environmental system, but nonetheless, over half the population perished. Some survivors clung to Atlantean culture in cities like Lemura and Sylanda; others forgot their origins, becoming ancestors of the Swamp Men and other tribes. The animal-people developed their own societies, sometimes, as with the Aerians and Pterons, resorting to war. Every thousand years or so, high priests needlessly conducted human sacrifices to "protect" the Land. Circa 3000 BC two godlike aliens briefly made the Land their home, but this was later discovered that they had departed years ago.

Now The Land is un-used. A forgotten land that none have been able to pass through, untill recently however... The Shard of Nirvana that had been hiding this world from outsiders view was stolen a little bit after the Horsemen attacked ( In Ark 21 ) And the lands that were once un-seen by outsiders became a world that any could go to.... if... they could survive.

Retrieved from "https://yakuza-mob-roleplay.fandom.com/wiki/The_Bleak_Terrian?oldid=38794"
Community content is available under CC-BY-SA unless otherwise noted.