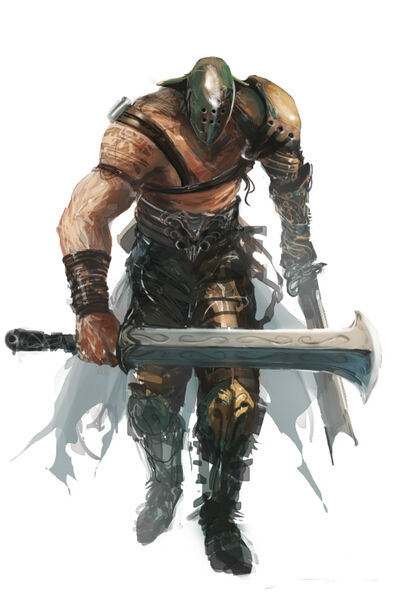 Up there you see the usual body of the man known as Thadeus, but underneath that metal head is 2 other personalities, laying dormant in the fair reaches of the brain. The dominant is of course, this cruel beast. This monster being a schizophrenic but instead of seeing the illusions in real time, the illusions are placed into his hand and parade around like they own him; which they do. A few illusions going so far to tell the beast what he eats, how he steps, how he blinks and if he did good today or not, usually this illusion gives him a "treat". In his mind, he's always battling against these illusions and it destroys him on the outside as he just looks like a soulless being wondering around. There is a few times where these illusions are not there, instantly being thrown away like they were never there and that is during the slumber of the beast or pleasure time.

With that under wraps let's go into the powers this creature has; All going back to the tri-orb. With this weapong Thadeus possesses nothing but sheer power, having amazing hand to hand combat skills. But the most destructive thing in his arsenal is of course his unpredictability being a deranged monster that THRIVES off of torturing and destroying the people that step in his way, that's his strongest power.

The man behind orb 2: Now with this, Thadeus is releasing enough power from the orb that he has obtained to give off an entire new look and style, being that of a upper class citizen. You'd expect nothing from this form correct? That's sorta where you're wrong, being the favorite go to in a pinch this form has the ability to use the left over orb and form it into the little dagger that they call Pan; referencing the god of nature.

The mind set behind this man can rival the greats when it comes to battle analysis. Picking apart the situation at hand to the very last detail before making his move, like the usual Thadeus he has the schizophrenia, but it isn't as severe as it is with the normal Thadeus. This time the illusions appear on the battle field, so bringing in count those illusions with his analysis is a very risky thing, sometimes costing him big. Being hand to hand skilled as well, but using kicks more than his hands, it's obvious that keeping away from his legs would be advised when this creature stalks the world.

The god trapped in orb 3: No off the bat he is no god, he is like the other two, regular man but with the god complex thinking that he is easily greater than the rest. Unlike v2 this version has real hair and clothes, being trapped inside he instantly swaps his place with Thadeus v1 and v2, trapping them in HIS prison. With the schizophrenia being completely gone and only being trapped into the orbs to torment the other two, V3 tries his best to stay but cannot, so he aims to inflict the best pain he could. Welcome to the sadistic side of Thadeus.

In battle, this man has no other goal than hear the screams that escape the windpipe of his foes, going as far to sodomize males, and crush in the stomach, near the ovaries with his boots, to the females. It can change whenever he wants lacking in any battle analysis or strength, he makes up for it in the way he uses the orbs. Causing them to shape shift into the weapons of his choice, usually being a shield and a throwing knife. Being the man who is trapped in those orbs they usually return to him though there is a limit: 15 minutes. Is how long this man can stay out of his prison before going back to V1.

So of course you can see the difference in sizes on these orbs, the biggest for Thadeus v3, medium sized for v2, and the smallest for v1. This being their differences in will power. V1 being the weakest with the strongest form of schizophrenia in the trifecta. V3 being the largest, and when v3 is out he can mesh and shape those orbs to whichever he wants; to a limit. As they are not infinite but easily able to make a canon and canon ball from all 3 in v3. Not much more is known about these orbs as they are just the main source of power between the three. 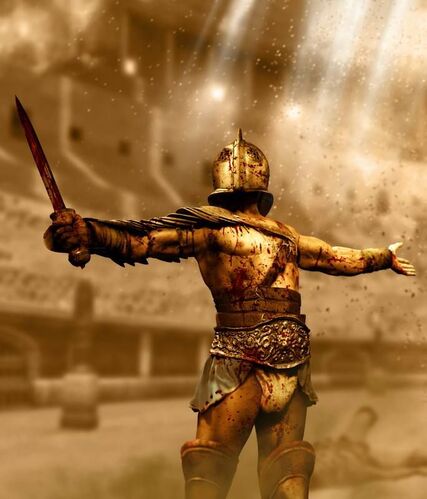 is a gladiator fighting style that represents the Roman legion. It is the oldest fighting style and the first to use the gladius sword as its primary weapon. The Murmillo is the most popular of all styles because it is classed as "the home town hero"

The Murmillo fighting style was suited for men with large muscular arms and strong heavy shoulders needed to help him carry the weight of his shield and sword. Men who played the Murmillo were shorter than most other Gladiators

The Murmillo depended on his strength and endurance to survive the battle against foes who were more suited to attacking. The tower shield gives him an edge in defense and his gladius also gives him the ability to thrust and swing at his enemies when in close range. The Murmillo are also trained to kick their enemies with the thick padding worn around their legs. Murmillos are supposed to resemble fish.

Retrieved from "https://yakuza-mob-roleplay.fandom.com/wiki/Thadeus?oldid=50055"
Community content is available under CC-BY-SA unless otherwise noted.