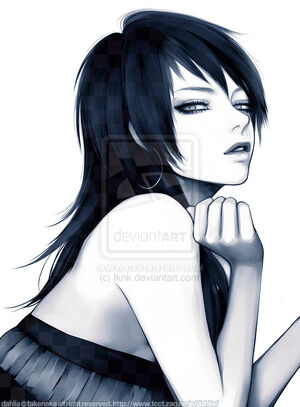 Tatsuki is an individual who prefers the company of herself to the company of others although if someone else needs to be around to help her she will be alright with it. She is an intelligent woman who doesn't have much regard for the usual rules of the land but instead chooses the path she most feels is the right one, which in her case usually is the path of good. Inside Tatsuki has a desire to help those who need it but she can't be bothered most of the time to do it with other people or to take the credit for doing so. On the outside, Tatsuki hates dealing with people, but as lf late, she is fine with it and doesn't mind it all too much. She still prefers her alone time when not with everyone else.

Tatsuki uses a close style of combat that doesn't resemble any sort of fighting style but utilizes her high intelligence and knowledge of her own body to use it with its own way for maximum efficiency.

She utilizes nanobots that can control and manipulate electricity. At the lower levels of control it only gives the ability to manipulate it. At a further control of the ability the full use of electricity like the power of lightning is given.

A special alloy staff that can harness her nanobot powers. It is collapsible and can fit in her pockets with the ability to also harness small senbon like needles for piercing effects or small knives for a naginata like appearance and use.

Tatsuki grew up in one of the branches of the Murasame household being the youngest of three siblings. Her parents never paid much attention to her other than to give her what she asked for or needed. As as child she always felt fascinated by everything technological and science fiction. Her favourite stories always included talks about visiting alien worlds on space ships that were hundreds of years into the future. Tatsuki never felt much connection to her parents or older siblings and often she spent time in her room playing pretend with her toys to keep herself comfortable. As she grew older, Tatsuki further distanced herself from her family and the people around her as everyone kept thinking she was weird for the things she liked and did. This never bothered her because it gave her more time to do things she really wanted to do which was read and work on her tech machines. Even from a toddler Tatsuki had an intelligent brain, not just for fantasy but for maths, science, computers and other things. She always got good grades in class but despite the extra smarts, she still kept to herself even through middle school where she was offered to join the schools most prestigious science club. Tatsuki turned them down to choose her own path. At the age of 14 she bought some tech off the web that claimed to grant her abilities to control electricity, Tatsuki was intrigued and bought them later using them to further her ability to create her tech. Before she started high school, she developed a computer system she calls JAK that is a voice operated house wide system that will do anything she wants it to do that any computer can do and more. (Functions just like J.A.R.V.I.S) It takes the form of a late 20's male with a smoothie voice and can behave like a human but only because Tatsuki programmed him to function in that way. High school started off the same as most of her life, the students believing she was weird and avoided her and Tatsuki avoiding them to keep them from hassling her. She has a habit of skipping a lot of class, choosing instead to have her homework and school work emailed to her so she can do it at home, another way she keeps away from the hassles of people.

User can use/access 100% of the brain capacity, gaining extended knowledge and usage of the brain. They are able to think in ways that they could never have imagine or understood before. Users can remember things they have forgotten, replicate knowledge, and become completely competent and aware of the situations they are in.

The user's natural five senses are pushed at the highest limits of human perfection; meaning that their sense of sight, touch, hearing, smell and taste are enhanced. An individual with this ability are capable of seeing further, acutely touching ink on a page, hear small sounds, have a smell capability similar to an animal and tasting accurately than normal members of their species.

Retrieved from "https://yakuza-mob-roleplay.fandom.com/wiki/Tatsuki_Murasame?oldid=51685"
Community content is available under CC-BY-SA unless otherwise noted.