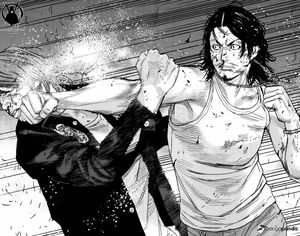 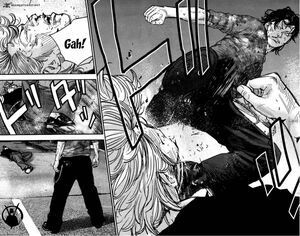 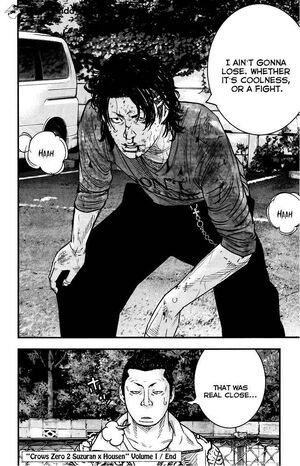 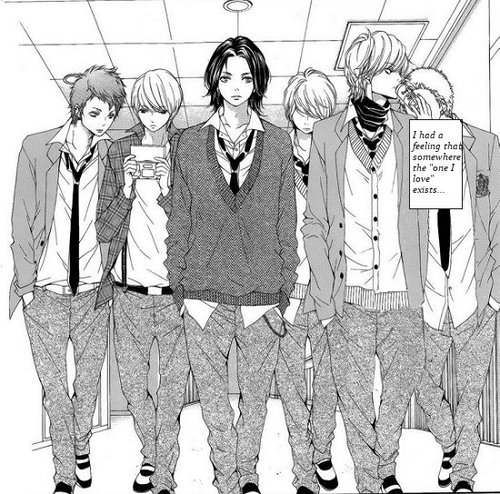 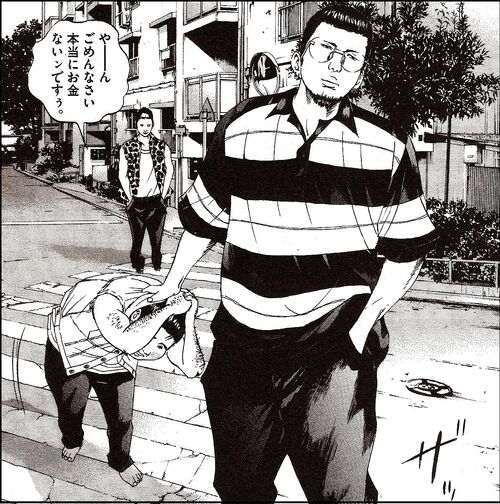 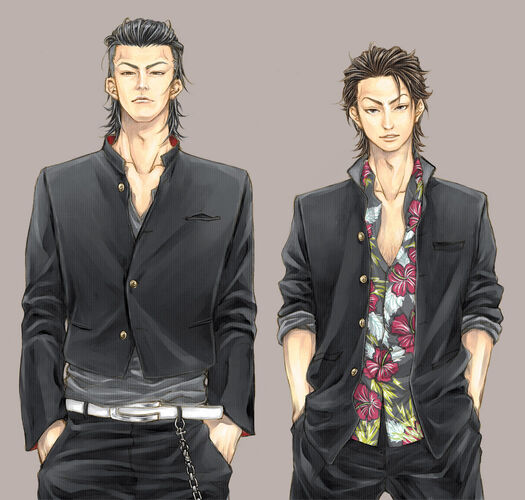 Bible of the Damned

The Legendary tale of a world... where hell had been brought upon earth after years of it being on the horizon. Out of the ashes of hell driven earth, rose a kingdom , a utopia that all could see... and around this kingdom of gold had been a lake of blood. This lake of sacred blood brought the dogs of war... and they all drank from the lake empowering them, turning them into SAVAGE WOLVES. There Power knowing no end after feasting upon the sacred blood untill they'd finally invade the kingdom for themselves. These are the tales of those Dogs of war... This is there story, as they turned this once proud powerful kindgom of glory... into

Ark 1 : A Yakuza's way - Where the story all began... enter young Keyome Tasanagi, Aspiring young Yakuza boss who was soon to be challanged by a rival of his fathers... The Legendary Danchou. Watch as the war between both sides would cost the lives of many, and cause an unforgettable rivalry.

Ark 2: Similar Pains-  It has been two months since the russians invaded Kasaihana. After the Russians and the Armada raged through the city,  the forces of Kasaihana city battled them off long enough for the young chairmen to destory Danchou and his plans. Now that the city is calm again something else is stirring. Vigilante pop ups, the Aramda still lingers, and a new deity of darkness has shown face? How will it end.

Ark 3: The Flint of the fire  - Ark 3, The Calm after the storm is what it could be called after the fercious battle in Ark 2 against Tanaban. Now a full Year later in this Ark Donnie finally reclamied his title as the rightful leader of the Soramaru Clan, ulitmately turning it into a full Corporate busniess. Isabel continued with her role as running her clan, and doing so perfectly. The Super Cop and his girl friend have been living happily since the tournament, and Even a new Young Hero has entered the cast by the Name of Ryu. Young and egar he throws himself right into the fray of the growing Yun Corp. Even Keyome Tasanagi seemes to be Running his clan perfectly.  But..... Nothing stays peaceful within this hell of a city. An Old Anti-Terrorist Unit Goes Rogue becoming the biggest threat to the city forcing everyone from all different sides to work together to stop these

Ark 4: Three kings, one city.  - In this Ark, this was the Kagemaru take over, the Donnie Yun Down fall. And the Tetsu Revolution, The Big 3 clashed hard in this Ark for the battle of the city, dragging there friends along with them for the ride as they all battled for the sake kingship. Who will rule it all?

Ark5: Visions of Granger - 16 years later after the last chapter, the main characters have grown, but there children run rampt. Learning as they go and meeting new faces along the way. Life in Kasaihana city hadn't changed... much. However, one mysterious girl causes an up-scale war because of her gift that will leave blood and torn battle  throughout the city. Enter Generation 2.

Ark 6: The Darkness of broken pedals - During this time, relationships grew, and fell all in a matter of a few months. The After math of the Mysterious man's attack left the city at a slow recovery rate. Yet love and frienship was made, new secrects brought out to the light. And with it, more pain and hatred. The Darkness slowly consumes the city with its everlasting grasp.

Ark 7: The Road to District 4 - In this Ark, the remaining big 3 have died, leaving there kids to pick up where they left off. With the city under constant seige, The road to District 4 slowly starts to pave its way as they discover new things about one another all of the heroes finally pull together, to make there push to the world of the unknown.

Ark 8: The Legend of the Onigami- This ark, was the first introduction to the shinto realm. Freindship, love, and something to fight for is the main element of this ark as the heroes fight for one cause. To protect a land that isnt theres. So that there world wouldnt feel the devastating after shock later on. Fighting for there loved ones they all picked up Blade, and shiled... charging into the hands of destiny.

Ark 9: Draining snow - Two Years later. Signifacant changes have occured throughout the city. A Strange errie snow has poured down from the skies over Kasaihana city. Seeming that it hasnt snowed in that part of the united states since before ww3. It's incredbly odd. The Snow has restricted everyone from using there Chi or Inner Hadou's. The Kagemaru clan in an allout civil war over the next chairman to be. Tetsu Ryoji's killers still at large, and old friends retrun to show there growth as well.

Ark 10: Tournaments of Blasphamey- The The Grimoire makes there final push to gaining what they need. Constructing there own tournament in attempts to rid the Shinto realm dwellers and obstract something from there Gene pool. The Rigged tournment will be the cost of many lives... Behold the Tournament of Blasphamey.

Ark 11: Mutant Raid - During this Ark, The walls were dropped as the mutants flooded through the city momntairly causing all havok. Enter the chaos as the gaurdians of Kasaihana city face yet another threat.

Ark 12: The Death Angels/ Final stand of the Grimiorie- Once again, heading straight into the shinto realm. They had followed The Grimiore inside for the final push to stop them. The Grimiore had finally acheived all of the steps to get what they had been striving for. The gang follows right behind in pursuit where they nose dived right back into the shinto realm. Though the god's arent on there sides this time there forced to grow in power on there own.

Ark 13: Pride rock- Returning to pride rock may be hard... taking over your responsiblites comes with being an Adult. But what do you do when your responsiblites are all coming down on you with an omnious group of terrorist, killer KPD's officers, and Ex-Yakuza factions setting to blaze all you've ever known... Things just got complicated.

Ark 14 : Pride rock part 2 - The Continuing of the previous Ark.

Ark 15: War Cry- A cry goes up a mist the city lights calling all those who seek justice against the Kagemaru Clan to stand up and fight. But in a battle like this where the stakes are just as high they're are no winners or losers, and who gets control Kasaihana City in the end ain't just no mere prize.

Ark 16: Enter The Third Generation!-10 year later... With birth of Spring always come something exciting and new, and now that the 3 Generation of Kasaihana's youth are of age, entering high school, and they ready to show this town just exactly what they can do.

Ark 17: Sunset Glory- As the Third generation continues to grow, so does the world around them. But when whiff of the the GMAF comes into play, these teenage angst horndogs kick it into high gear as they ready themselves for the greatest adventure of there lives.

The GMAF's are on again but differntly thistime, watch as the young warriors ready themselves for the greatest battle of therelives. Little do they know... the evil that lurks gently behind them as they continue there push forward.

NOTE! These Episodes are laid out here due to the simple fact that some of these episodes arent labled by categories and are on a IMVU forum, if you cant see the episodes on th IMVU form, seek out an admin so we can invite you into it so you can check it out for yourself.

Ark 19: Rebirth of a generation- After the devastating effects of the previous ark, the young teens were thrown into an early adult-hood after Sector Olympus exposed themselves to the young warriors, will they recovery?

Ark 20 Blistering Winter - The Blistering cold ark, watch as the young gaurdians of Kasaihana continue to ready themselves before the Sector Games, will they be ready for what comes next as Sector Olympus cheats before it all comes into play? The Order comes to battle against this generation as they rush in for these artifacts that they call the 'Shards of Nirvana. '

Ark 21 The Cold Front - The Cold Front Ark revolves around Sector Olympus last attempt at weakening the city, enter the ultimate battle against The Four Horsemen of Acpcolypse!

Ark 22 A Madd World- During this ark, The Triads would have attemtped to move against the Fire Flower Syndicate in hopes of taking Kasaihana city for themselves. But they werent expecting a rouge Sector Agent to be played in the mix as allies become enemies and death takes a toll over the young.

Ark 23 The games approach- This Ark was based simply upon the last moments before the Sector Games.

Ark 25 Total Darkness - After the destruction of Kasaihana city and the Sector games had been won. Before Hades died, he sent the world into a level of Total Darkness, the world, going hungry, the rate of death and carnage had increased. And the Heroes of the Sector Games were labled as Terrorist to the rest of the world by word of The President, Yani Farhan. With the reoccuring Omega gene regestration acts , the world is slowly being torn into two sides. Constant battles and adventures are based upon this saga of total Darkness.

Within the city of Kasaihana the many Yakuza clan's that run them are all over the place. Doing what they pretty much want and feel like doing. Living on nothing but there Brutal tactics and Moral codes that they have formed  amongst each other. The Orginzations throughout the city are not gangs. Because there Orginazed, but there not Yakuza either. They are there own form of Syndicate. Mostly operating out of Criminal ways. They can be Corportaions, or Vigilante groups that arent simple minded killers.

(( Everyone can make up to 1 gang per character, the gang application will be made for those who are intrested in making some. Please do not edit the actually gang application page. Thank you, make your gang reasonable and try to make them unique.))

~Not available at this time~

The Grand Martial Arts Federation or ( GMAF) is a fictional world-wide martial arts competition that is held infrequently and is hosted by they Chairmen of the Kagemaru clan. It draws renowned fighters from all around the globe to fight and battle it out for the prize money and worldwide fame.

The Ablites you must always ask an Admin for Permerssion. .

Retrieved from "https://yakuza-mob-roleplay.fandom.com/wiki/TSL_Directory?oldid=48478"
Community content is available under CC-BY-SA unless otherwise noted.