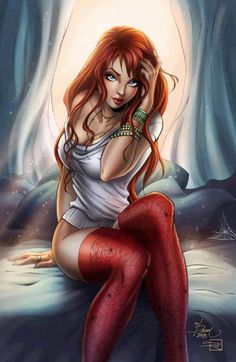 Goldie -Given to her by Arthur and Damon 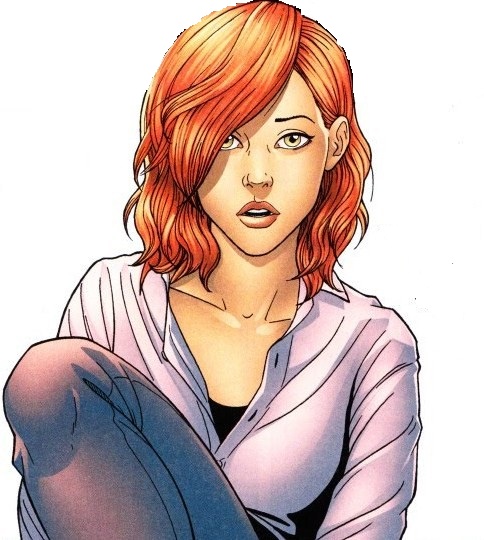 Sarah in her human form is a very seductive and very erotic female for her age. She is not shy of using her body to help give her an advantage towards the opposite sex, even the same sex in certain situations. While she can get crazy in her Symbiotic form, in her normal human form she can be very kind. Due to her new master in Damon, she is somewhat more of a submissive person and grows to love being treated badly. Her mind has become accustumed to being treated like dirt and when she encounters men who treat her nicely or not to the level of rudeness that Damon treats her, she gives them the cold shoulder as if they are not worth her time. While in the Symbiotic Suit of the Y-serum, she is one crazy bitch! One is to stay clear of her when she is Goldie. That hair of hers is ready to rip right through anyones body with even the slightest bit of aggrivation.

In human form, Sarah is a very beautiful red headed girl with a very well built body for her age. With 36C Breasts and junk in the trunk, her body gives off the catchphrase of "Body like a coke bottle." When in her Goldie Form, her suit is originally black but because of her raging emotions, her suit has become more of a red and yellow tint along with the black. Her long red hair extends even further down towards her legs and becoming yellow and red.

A chaotic evil character does whatever his greed, hatred, and lust for destruction drive him to do. They are hot-tempered, vicious, arbitrarily violent, and unpredictable. If he  or she is simply out for whatever they can get, their  ruthless and brutal. If they are committed to the spread of evil and chaos, he or she is even worse. Thankfully, their plans are haphazard, and any groups he or she joins or forms are poorly organized. Typically, chaotic evil people can be made to work together only by force, and their leader lasts only as long as he can thwart attempts to topple or assassinate him.

Chaotic evil is sometimes called "demonic" because demons are the epitome of chaotic evil.

Chaotic evil beings believe their alignment is the best because it combines self-interest and pure freedom.

The personal code of a chaotic evil character may look like this:

1. You shall lie whenever convenient.

2. You shall harm the innocent whenever convenient.

3. You shall kill for pleasure.

5. You shall not honor any other before yourself.

7. You shall betray friends, family, community, and nation whenever convenient.

8. You shall harm those who protect the weak or honor laws.

9. You shall pursue all forms of pleasure.

10. You shall seek unlimited power over others and unlimited freedom for yourself.

D2 with Damon and Arthur

Assassin for the Venom Corps

1 of 7
Add photo
Though it is not an official fighting style, when using the Super Serum to aid her strength, she is quite the tectical fighter. Using her tendrils she is a very prominate long range fighter. During her fights she will do everything she can to keep the fight at long range and keep the opponent on their defense. So far none has been able to get past this tactic of hers and no one has yet to see her hand to hand style of fighting.

Failed Y-Serum Suit: Sarah possesses all the powers and abilities the original failed Y-serum Beast had, including a few abilities unique to herself. While at first Sarah could not properly control her "other," Goldie eventually began using more advanced powers granted by the serum, including camouflage and limited shapeshifting. Her full range of powers consisted of:

Arthur: Arthur and Sarah keep a close relationship as they are the only two remaining failed Y-serum experiments left in Kasaihana City. When Damon had found them in the old KPD Prison they were both lost souls with gifted uncontrollable powers and abilities that they had never dreampt of having before. Sarah looks up to both Damon and Arthur, but sees Arthur in a different light than Damon. She can understand and relate to Arthur more effectively due to the fact that they are both two sides of the same coin. His maturity helps keep her in line, knowing that Arthur is the second in command of the Venom Corps. Being at the bottom of the three doesn't bother her because she knows and trusts Arthur.

Damon: The Leader and Her Master, Sarah lives and breathes to follow every order and wish that Damon desires her to do. Before her time in the Venom Corps, she was a lost sould which made her easy to pick for experimentation. After being rescued (Which is a word used loosely) she became enfatuated by Damon and his own plans. She has no problem with Daisuke Yun but just out of Damon's hate for him, she has grown a hate for him as well. This shows just how much she is willing to lose her own ideals and values to help be closer to Damon. He treats her like a slave and yet she is attracted to that kind of behavior. Loving her he pushes her around, it keeps her wanting more from the mighty Super Soldier. She has yet to say no to him or even show any sign of unwavering feelings towards his leadership. He might as well be a God to her as she completely follows his every word.

Daisuke Yun: The other half of the mighty Yun Spectrum. Daisuke Yun is the main antagonist to the story that Damon Yun tells. The brother who in Damon's eyes, got it all. The Boy Wonder who Sarah has come to hate just by sheer assosiation to giving her beloved Master any grief. By the words that Damon spills about him, she has come to grow a mighty hatred for the once Super Soldier. Because of these words that Damon speaks about his brother, Sarah keeps her feelings secret that she now wants to kill Daisuke just hoping that it would make Damon happy. Even though she hasn't even met him or been in the same area that he has been in, she hates him enough already to want to kill him with her own tendrils.

Akira: Akira is one of the few people to ever see Sarah's true form. After taking a full powered fire-lightning blast from him during their fight on Coney Island. Akira was able to see the real beauty that lies underneath the monster that she is when she is Goldie. Goldie thinks Akira to be an attractive male but she would so much as kill him as she would want to jump his bones. Before she could actually kill him, Arthur had given the boy a chance to live. During the night on Coney Island, Akira was not their goal therefore Arthur did not want him killed. Because of this, Goldie still has this itching feeling to want to kill him. Seeing as he is someone who was able to hurt her even for a few seconds, she would love to be put in the same place as him again.

Retrieved from "https://yakuza-mob-roleplay.fandom.com/wiki/Sarah_%22Goldie%22_Lawrence?oldid=27862"
Community content is available under CC-BY-SA unless otherwise noted.