Red is the most calculating, cunning and analytical member of the K-City Saints,   He is able to carefully look past his feelings and see the real situation at hand, which has been demonstrated on more than one occasion. He is extremely perceptive, able to quickly recognize the patterns and mistakes that his opponents make, which gives him an edge. In battle, while his preference is to concoct strategies based on deduction of his opponents' fighting abilities and style, his natural battle instincts are also highly tuned. He is capable of slashing another person's head off in just an instant, relying only on impulse. However, his care for his friends and family are the backbone of his fighting drive, as he would sacrifice just about anything to protect them and thus making him a reliable teammate despite his cunning front. Red has a very kind heart.

In the face of adversity, Red has the uncommon ability to shun all emotions and shine a blank slate, thinking three to four steps ahead to clutch the pinch and seize control of the situation. Coupled with his vast intelligence, his detached emotional state is perhaps his greatest asset.

Despite his physical appearance, Red has very high durability, shown in almost all of his matches. Because of his analyzation lenience, he is always the most injured in his fights, but manages to pull a trick out of his hat to decide the match.

On a typical day, Red has bright green eyes, as well as long vibrant red hair, with two long forelocks on either shoulder and the rest on his back. While in this form, he is occasionally mistaken for a female because of his long hair and delicate features. He often wears his school uniform matching pink slacks and a jacket with gold trim 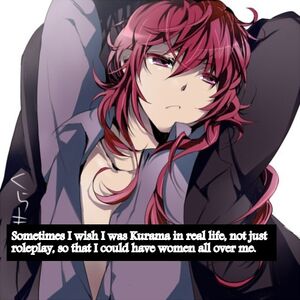 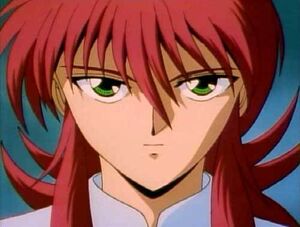 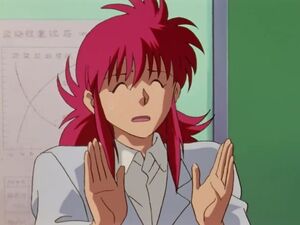 Retrieved from "https://yakuza-mob-roleplay.fandom.com/wiki/Red_Oak?oldid=31286"
Community content is available under CC-BY-SA unless otherwise noted.