"I follow the true path of a Samurai...the Swordsman's way!" 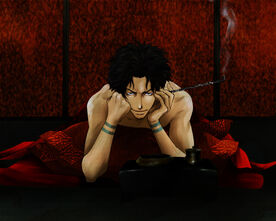 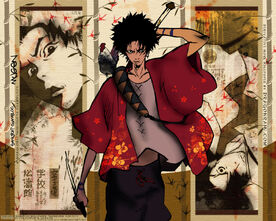 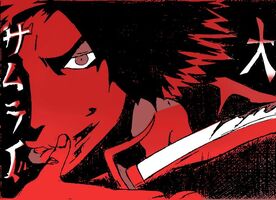 Raijin has messy flowing black hair in an afro-like style and a small beard. His clothing resembles of baggy hip-hop fashions of today.His attire consists of a grey shirt with a stitch pattern running down the middle of the shirt ending at the halfway point of the shirt. He wears this under a red long-sleeve gi that functions as a jacket. He wears hakama cut off at shorts-length, resembling loose-fitting Bermuda shorts and japanese Geta (wooden sandals) on his feet. these geta are fitted with several metal strips on the soles, allowing him to use his sandals as blocking devices. Lastly, he carries his sword on his back with a sash that goes from his left shoulder to his right hip. It has a zig-zag pattern of green and brown.

Growing up in a hard environment like District 1 Raijin has a rather tough personality. He has a bad behavior problem at most times when it comes to authority. Growing up he had an heroic behavior always jumping in when some local kids would get picked on. He never actually thought it was cool to make fun of someone because they were weak. Raijin can be very vulgar and rude at times. He has a slightly dark sense of humor. Under all his rude and lewd behavior Raijin is a great womanizer. Since the events of the Trigon Raijin has been more intune with the spiritual world and the living world he knows it's more than this plane of existence.

The Priest, a Legendary Orginzation formed back during the times before men even had guns, after the first priest. A group of his followers discoverd his ways to his power and took the oath to fight the evil under the law and trust of 'god'. These priest are men and women, one in every city in the world who work day in and day out to defeat the evils and protect the good. They are not of light, and they are not of dark. They are of the gray, the area where no allignment resides and where no law but richenous and duty. The priest work as powerful unity and super networking system that allows them to manuever and slip through legal systems. No one even know's of the priest legacy and their secrects. To the world, it's like they don't even exist. This is because the Priest  during the days of Christ formed a bunker that was way before it's time.

The word "Dou" leans motion. A Dou type martial artist uses his/her anger to exceed his/her limits. As such, they tend to be aggressive in combat, and very rarely strays from the offensive. At some cases, they are even bestial, as seen with Miu and Kisara, after receiving intense emotional pain and frustation, respectively. Users seem to rely heavily on instincts and brute strength when fighting. Dou fighters have a technique for reading the opponent's movements which relies on exciting themselves that's an equivalent to a Sei fighter's Ryusul Seikuken

Karate is a martial art developed back wayyy before the war in the Ryukyu Islands in what is now Okinawa, Japan. It developed from the indigenous martial arts of Ryukyu Islands (called te (手), literally "hand" tii in Okinawan) under the influence of Chinese martial arts, particularly to that of the Fujian White Crane.Karate is a striking art using punching, kicking, knee strikes, elbow strikes and open hand techniques such as knife-hands, spear-hands, and palm-heel strikes. In some styles, grappling, throws, joint locks, restraints, and vital point strikes are also taught.A karate practitioner is called a karateka (空手家). This is for everyone who simply wants to be a powerful diciplined fighter. Like the other two styles, this base style can be branched into something much more powerful later on. With this style your more than likely much more intelligent the average bear and you can really dish out some damange.

Raijin owns his very own tsuruji sword modified to look like that of a sai. The sword has a double edge blade and is extremely sharp. The blade is pass down from his grandfather to his father to Raijin. The sword itself is made from solid steel. After being activated by Trigon the Tsuruji has the ability to be effectable by being awaken by the Essence/Presence of an Oni. The blade itself would extend it's length 2x the avarge size becoming 60 cm (23 1⁄2 inches). The sword would produce and Aura/Scent that is very toxic to an Oni and the Oni/And the Oni holder, the sent causes eye burning ichitiness and swalling in the eyes so it would be hard to see the Blade after Jin had got a hand of it created a way for the sword to remove Oni chi from the user suckin their extra powersouce they gain from the Oni rending them to become normal for the time being. Raijin knows very little of how to activate this ability only that he knows it happens whenever he is around evil demons. When the ability is acivated it changes the form of the sword to a more demonic version of it. Raijin believes this comes from it's activation from Trigon.

Hope
Add a photo to this gallery

Hope is Raijin's closest friend after helping escape the lab of Dr.Takeda Hope invited Raijin into the Priest bunker in hopes that he would help him reclaim the sword Dr.Takeda stole from Raijin.

Being born from a long line of Kendo swordsmen Raijin had a natural affinity for the swords. His father was a professional Kensei until his murder in district 1 when Raijin was the young age of 12. His father had already taught him many of his techniques he was more than able to fend for himself. After his father died Raijin went to live with his grandfather who was a retired karate master. Raijin begged his grandfather to teach him all he could about the martial arts telling him he wanted to be just as strong as him and his father. At first his grandfather denied taking him on in hopes it would stop him from ending up like his father or even worst. But eventually Raijin’s grandfather broke down and accepted Raijin as his student. His training was grueling and tough. Raijin also continued his practice with Kendo as well as learning many karate styles. He learned more from experience as he was in many fights growing up protecting small kids in his neighborhood who couldn’t help themselves. Of course all his helping was also hurting him as he would get jumped multiple times and landing in jail on occasions. By the age of 19 Raijin was a force to be reckoned with. He made his own substyle to Kendo which allowed him to move more freely with his techniques. His mixed-martial arts style of Kendo also contained his own freestyle approach to it. At the age of 20 Raijin’s grandfather died of lung cancer. Now all alone in Kasaihana City Raijin managed to move out of district 1 and into 2. He lives in a small based on income apartment in District 2 and a delivery boy for a local pizza shop. By night Raijin traverses District 1 and helps crack down on crime let it be big or small. Raijin is now part of a organization known as the Priest after he helped the group take down the evil demon known as Trigon.

Retrieved from "https://yakuza-mob-roleplay.fandom.com/wiki/Raijin_Kaminari?oldid=51366"
Community content is available under CC-BY-SA unless otherwise noted.