Nadine's appearance just screams nerd, glasses, sometimes less than figure flattering clothes. Not exactly a guys dream girl, and she really doesn't care about that sort of thing anyway. She loves her book store more than anything, so having a man would only get between her and her books anyway.

Strawberry blonde hair held in place by a headband, pale green eyes, if she would spend the time to dress up everyonce in a while she'd be rather attractive. There is one thing that is always consistent with her wardrobe and thats the necklace she always wears. To everyone, it just looks like a locket in the shape of a book. But in actuality it contains, her livelyhood, a small hacking devise that she created in order to hack into the accounts of bussineses all over Kasaihana and the world. The information she acquires she later sells to the highest bidder.

Nadine's voice is Urd from Adventures of Mini-Goddess

(Never seen this before but I thought she sounded hillarious. She's the one with the long white hair by the way lol)Edit 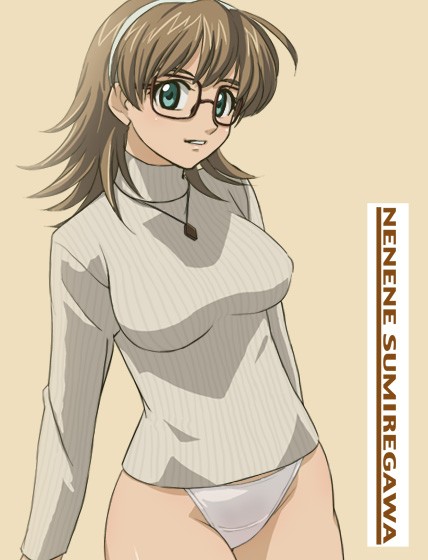 'What district' do you live in?Edit

Nadine has been engaged seven times, but has got cold feet right before the wedding every time.

Nadine, has had many different jobs over the years. She was once a librarian at the Kasaihana Public Library, as for now she owns a small book store in district 2 called Once Upon A Time. Living in a small loft above the store she also writes short romance stories for a womens magazine. However, perhaps what makes her the most money, and what fuels her addiction to books, is the selling of infromation to various Yakuza families. Her computer skills are phenomenal and she is known for hacking into computer systems.

Unless you consider flailing her arms around like a muppet a fighting style, nope she doesn't really have one.

Her mind, she doesn't really fight, but she can hack into a computer fast.

Nadine grew up in District 2 the only child to an insurance salesman and a her mother who was a homemaker with an obsession for making quilts and reading steamy romance novels. This probably is where Nadine, got into the habit of writing dirty stories about hunky men sweeping mousy shy women off their feet and having, hot unadulterated sex. At an early age it was shown that Nadine was quite intelligent and was actually skipped ahead three years in school. Meaning she graduated, a full three years ahead of peers her age. Her entrance into college at fifteen years old was quite the surprise to her parents who were quite average people who never expected their daughter to be a border line genius. They did their best to provide the best for their daughter but they could only afford so much on the budget of a man who sold insurance. Yes, Nadine received scholarships and the like, but even that wasn't enough for her to pay to go to one of the top colleges in the country. So Nadine with her intelligence came up with a way to supplement her income.

She had always been good with computers, at one point she was even running tech support for the Kasaihana High School when she was attending school there. In high school she had used this to get dirt on important people in school. Teachers, students, she didn't discriminate as long as she was paid, or even given protection.  Of course using this in the real world meant she would have to hack into important things like police records, bussiness accounts. Anything that someone would pay good money to ger their hands on. This turned out to be a very good endevor for Nadine and had no trouble, paying for anything from that point on. She invested alot of the money, and she basically finished college to have something to do with herself. After graduating, she took a job working at the Kasaihana Public Library in District 3, and for a time was an informant for the KPD. That is until she found a little store in District 2, and decided she was going to open up a book store.

Buying the place outright, it was in a state of dissrepair. Nadine, soon set out to remodel the store and the apartment above the store. That was almost five years ago. The store makes a meager profit, not that it really matters to Nadine. She uses it as a way to surround herself with the things she loves the most books. Her obsession is unreal, most of the time she never has time to read most of them. But she can't manage to stop herself. So she still falls back on her old past time of selling infromation to fuel her addiction. A new development that she has started in the past year, is her writing. She found out in high school that she had a knack for writing, and a year ago she read in a womans magazine about a contest. The contest involved writing, short romance story. Falling back on the books, her mother loved reading when she was a child, Nadine tried out and was surprised when she won the contest. The prize was of course, having a regular spot in the magazine. Nadine now writes an ongoing story, about a terribly shy librarian, who falls in love with a hunky good looking police man.

Retrieved from "https://yakuza-mob-roleplay.fandom.com/wiki/Nadine_Fowler?oldid=33277"
Community content is available under CC-BY-SA unless otherwise noted.