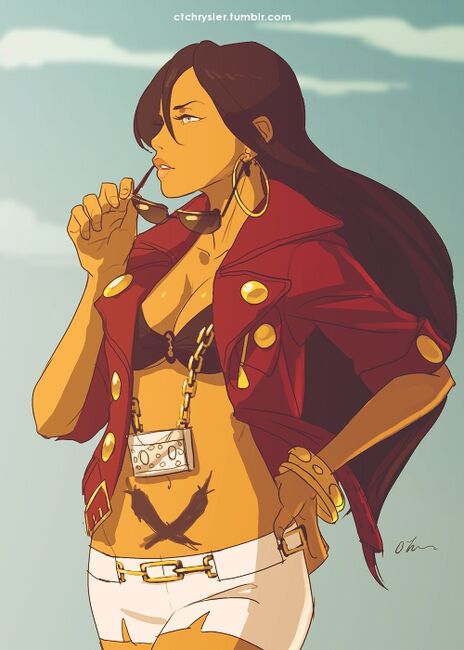 Felicia is a hot headed, strong willed, female that doesn't take crap from anyone. If she puts her mind to something she will do whatever it takes to get what she wants. If someone tries to get in her way... expect problems. Her foul mouth and her rebelious attitude is what made her parents kick her out at the age of sixteen. Which is interesting because that was around the same age they kicked her brother Nathan out of the house as well. From then on she scraped by living on the streets, and proved to be a very intelligent and stree wise kid.

Petty theft, prostitution, are just a few things she's racked up over the years with the police department. But she really doesn't care, she believes in doing what she want when she wants it without thought of anyone else. In her opinion no one ever did anything for her but herself so why rely on someone else to do shit for you.  As of late she's been getting heavy into a drug ring, selling and trafficing. Felicia believes that if she finally gets enough money, she can stop what she's doing and live like a queen for the rest of her life. But first she has to evade the cops.

Suprising enough the two Seymour siblings favor each other, tall, thin, with a rocking body. Felicia knows she looks good and uses it to her advantage. She wears clothes that always reveal some ammount of skin. Her mother used to complain that she always left the house with half her ass hanging out. But Felicia could really care less what anyone else thinks about the way she dresses.. well sort of. She knows the effect her physical appearance has on men and women alike and that if she works it enough... it could land her some cash.

Bank Robber, Drug Dealer, Prostitute, Felicia will do just about anything for money.

Felicia drives a scooter that she stole from a druggie she was selling to, when he failed to pay her what he owed. He must not have cared to, much because he didn't even recognise his own scooter when she came to sell to him again.

( Within YMRP, fighting styles are an essesnital and there is honestly little to no alternative for that notion. Having a fighting style is your right. It's your right to defend yourself! Click this link to see some of the principles for fighting and combat that we use within the rp, make sure to keep yourself updated so you know exactly how things go. YMRP fighting styles )

Your chi form, or energy form is based on what type of chi your char will use. From Chakra, to Chi, to the power of nothingness, to pyscho energy. All of these things will be for you to pick and choose from. Remember you can only pick one, so choose wisely. Click this Link to pick which one you want. -> Simply copy and paste the description into this section after deleting the current text. -> The Energy System <-

Brother: Nathan Seymour - Nathan is Felicia's flamboyant older brother. When they were younger, due to the fact that their parents worked all the time, and the fact that Nathan was nine years older. He was in charge of her care allot when she was little. When thier parent discovered that their son was a homosexual. She really hasn't had much contact with him, forced by her parents not to contact him and then later she just didn't know how he would react to her. However now she feels he is the only one she can turn too, and trust.

Felicia remeber's what life was like before Nathan was kicked out, she always thought of him as strong independent person. She looked up to her older brother and sort of idolized him. It never dawned on her that her brother was different.

He was always loving and kind towards her, and she always loved the way he would help her pick her clothes and do her hair. Loads of her friends big brothers picked on them, but Nathan was her bestfriend in the world despite the nine year age difference. It was when she was in school that people started to point out that there was something supposedly off about her brother the first time she heard the world "gay". To her it was Nathan... just being Nathan, and when some said negative  things about him she would often get in fights over it. When her parents finally confronted Nathan, and he admitted his sexual preferences she hated her parents for kicking him out. To her she had just lost one of the most important people in her life. It hurt even more, that they forbade her to seek him out and have a relationship with him. Claiming that it would only encourage his "deviant" life style choice. Felicia didn't see how it was choice considering... it was how Nathan had always acted... even before he was old enough to think about sex.

After Nathan leaving things sort of went down hill for the family. The home was constantly filled with negativity and her parents trying to forcefuly "encourage" her not to be like her faggot brother. Felicia made sure that her opinion of what they did was heard.  Getting in trouble in school, fighting with her parents, and it only got worse the older she got. When she hit her teen years, her rebelion ramped up even more and she started getting into criminal behaviors.

Theft, street fights, and finally car jacking, this put her in juvenile detention at the age of fourteen. She spent a year there, but this wasn't a place that taught her to change her ways. Felicia just learned more, from her peers in juvie, and when she got out she went right back to what she was doing... but with more knowledge. She basically quit school, spending most of her time on the streets, coming home on occasions, to pick up clothes, or grab a free meal. Eventually her parents kicked her out, and it didn't bother her really. In fact she felt like she was finally free to be herself.

Felicia has been living on the streets for almost five years now, doing anything from prostitution, dealing drugs, and her newest endeavor bank robbery. She had fallen madly in love with a man by the name Cassius Johnson a drug dealer/pimp. When he was arrested, Felicia devised a plan to get the money to pay his bail, and run away with him. She robbed a small town bank, and proceeded to try to bail out Cassius, only to find out that Cassius had a wife....

The bondsman informing her that he had already made bail and was now out with his wife. She was furious, and now on the run... she had no idea where to go that the cops wouldn't find her. So Felicia decided to seek out her brother Nathan... she had been a bit fearful of seeking him out over the years. Afraid that he was angry with her for what had happened, and just flat out not wanting to be a burdon on him. But with little other options... she began to invstigate where he was, and found the number for the brothel.

Retrieved from "https://yakuza-mob-roleplay.fandom.com/wiki/Felicia_Seymour?oldid=33918"
Community content is available under CC-BY-SA unless otherwise noted.