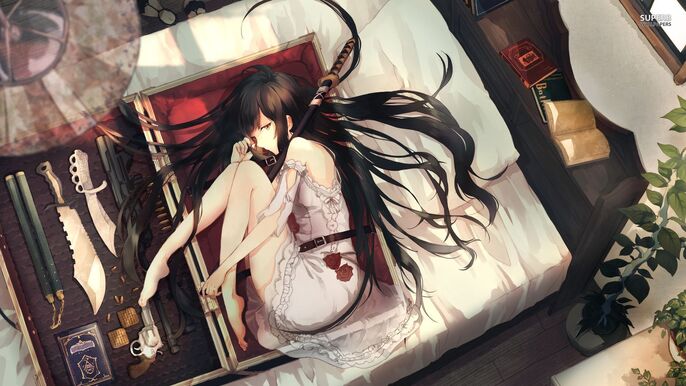 Senior, member/newbie of the Safety Patrol.

Student and Owner/Stunt Driver for her father's company, MC (Motor Community). Ever since her father thought that she was old enough to tie her own shoes, then she would also be old enough to watch the stunt men and woman of his company do the takes for the commercials and shows. Eva Rose loved it and at the young age of fourteen, she decided to secretly practice dribing a motorcycle herself, training everyday, she became a pro at the age of seventeen. Why would this come in handy, well she is the perfect girl for the job if you are looking for a fearless driver or an expert get-away driver.

Ninjutsu is a martial art that focuses on stealth and prosicsion. It is both an armed and unarmed martial art. Ninjutsu is an ancient martial art that's been integrated into countless martial art styles, mostly armed martial arts, and the traditional teachnigs of Ninjutsu have not been used in combat in centuries. The Kuremisago Clan has continued teaching the traditional techniques and have passed them down from generation to generation, doing so has given them a full understanding of Ninjutsu and the human anatomy, and as such they have become a Ninja lineage with access to unique fighting abilities. For those who want a bit of finess in there fighting, wanna be flashy and wanna kick ass. In order to have this style a master or someone had to teach you this. If you have this style and dont state who was your master who taught you these ways then you'll be asked to fix it.

Satsui no Hadou is a form of Ki that emanates greatly from oneself through the darker aspects of natural human instinct and the desire to survive, to trample, and impose over opposition, and on a metaphysical level, the natural occurrence and manifestation of loss, decline, and destruction.

To tap into the ki of the Satsui no Hadou, a fighter must be so consumed with the desire to win or have such an intense rage, that they are willing to kill. Only people who push themselves to be the best at all costs, can take full advantage of it. So even with a high level in combat, there would still be much to be done.

For those who do succeed in controlling it, they develop a cold, cynical detachment from themselves, as well as others. As such, Satsui no Hadou makes a person unbelievably strong, but at the cost of one's humanity and compassion, making them emotionless almost or almost insane if decided to let it consume them.

Another side-effect of this power is that when a warrior embraces the Satsui no Hadou to their fullest extent, they will gain a lust to fight to the death, their eyes will turn white or red, and their beliefs in fighting become very dark and cold-blooded. The warrior's personality will also change and become very violent and dark. However, as shown in the case of Goutetsu, if one embraces it to a small degree, their eye's pupils will become blue, and they will have no willingness to destroy anything or anyone.

Once a warrior has awoken the Satsui no Hadou within them, it can be very hard to resist. Learning Satsui no Hadou is the first step in learning the most fatal technique known to all of their martial arts, meaning everyone has a general knowledge but only when they train and master the martial arts can they fully use it. If one has used it to their fullest extent for too long throughout years of their life, they will transform into a demonic being, likely one similar to Oni.

Eva rose never knew of her abilities or powers as she never heard about the fact, that she even had them. But after a what suppose to be a nice lunch, she got picked up by the men of her company, she got briefed about it, by her uncle.

If she had to believe him, than that meant that she would have this mutant like ability, this power. Her uncle was able obsessed with power and he always strived for more and more, but after hearing the news, that his own brother on his deathbed spoke over giving his company to his daughter and not to his brother, he blew up with anger. At that moment he decided to stay low and close to Eva Rose, making her his little experiment, experiment X.

Her mutant powers are strange for a man who strived for power, but her primary mutant ability is an accelerated healing factor that allows her to regenerate damaged or destroyed tissues with far greater speed, efficiency, and finality than an ordinary human. Injuries such as gunshot wounds, slashes, and puncture wounds completely heal within a matter of hours and even sever wounds in a day or two. She can't heal during battle and is still vulnerable to explosions and lethal wounds. The effects of her accelerated healing powers extend to her body's immune system, rendering her immune to disease and infection, till a certain level. She is also immune to most drugs and toxins, although she can be affected by certain drugs if given sufficient dosage. Given the regenerative nature of her cells, her powers will heavily slow her aging process.

Eva Rose's mutant healing factor heightened her physical senses, strength, speed, agility, reflexes/reactions, coordination, balance, endurance to unhuman levels. She even possesses retractable claws sheathed within her forearms. She releases the claws through the tissue of her knuckles, leaving small wounds which are healed by her healing factor, within a matter of minutes. Eva Rose has only two claws per hand, made from her own bone. So they can break, eventually they would heal and grow back as claw like blades, but it would take months for that to happen.

The claws are form by manipulating the bone growth in her hands and body, but mostly her hands as it created these 10 inch long thick claws of human bone. They will only extract the first few time by anger as a trigger, but once controlled they can come out whenever desired.

She is highly trained in the use of long range weapons and specially the crossbow and is a formidable hand-to-hand combatant, with intensive training in numerous armed and unarmed martial arts techniques. She has also been subjected to conditioning in which a specific "trigger scent" has been used to send her into a berserker rage, killing anything in sight; her uncle is unsure if this will ever be fully suppressed.

With a crossbow, archers could release a draw force far in excess of what they could have handled with a bow. Furthermore the crossbow could hold the tension for a long time, whereas even the strongest longbowman could only hold a drawn bow for so long. The disadvantage is the greater weight and clumsiness compared to a bow, as well as the slower rate of shooting and the lower efficiency of the acceleration system, but there would be reduced elastic hysteresis, making the crossbow a more accurate weapon.

Crossbows have a much smaller draw length than bows. This means that for the same energy to be imparted to the arrow (or bolt), the crossbow has to have a much higher draw weight.

Her Mentor at KPD

Seek revenge together on the Liberator aka The Hunter

Got forced into this strange relationship

Eva Rose grew up in London, England, were she was the only child. She had loving parents and got spoiled with everything her little heart wanted to have. But one thing she was never allowed to do, fight. Being mommy's little angel, she always had to be the wife to be and never the man, wearing pants was a big no go. When Eva Rose's parents died in a car accident, she had to run the company of her father, becoming the director of a rather large company, who had a great deal of power behind it.

She found out that her dad was living a double life and now his reality, her dream, became hers..

Users of this ability are capable of achieving smaller and distant targets depending on the location. The user's brain is hardwired for advanced precision superior to any gold-medaled archer who has ever competed. Additionally, the user's aim is obviously not supernatural, it is just at the peak of human efficiency. It's said by peers or/and foes that users of this ability are near-impossible to miss a single/multiple targets.

The user's reflexes are at the peak of Human Potential and Perfection; this means that their reactions are superior to those of normal humans and are near-superhuman. They can catch a fired arrow in midair, dodge offensive attacks, and perform amazing physically defensive feats; They could even evade strikes from beings with super speed, and dodge multiple gunfire with ease.

Retrieved from "https://yakuza-mob-roleplay.fandom.com/wiki/Eva_Rose_%27Rosey%27_McClaren?oldid=34078"
Community content is available under CC-BY-SA unless otherwise noted.