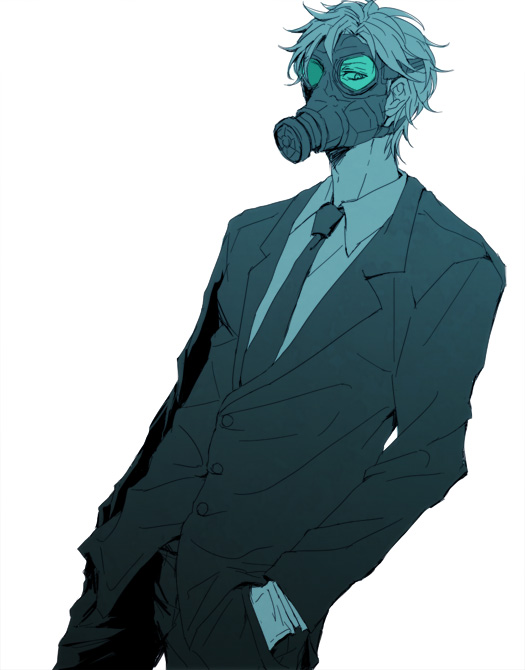 "The era of Yakuza was made for me to honor and me alone."

Underneath the continuous gas mask he is always wearing is a pair of red eyes to match his snow white hair, similar to any other albino person around. He's noted to have a relative, Ishin Takeda, who he is the spitting image of. It's rumored that the two are some form of relation, but none have confirmed the thought. h his fair, quite skinny, with a posture prepped by years of high society.

A neutral evil villain does whatever she or he  can get away with. They are always out for themself, pure and simple. They shed no tears for those they kill, whether for profit, sport, or convenience. They have no love of order and holds no illusion that following laws, traditions, or codes would make her any better or more noble. On the other hand, They do not have the restless nature or love of conflict that a chaotic evil villain has.

Street Fighting Is not a specific type of martial art but more of a discipline and is slowly learned through long experience in informal fighting. Due to lacking any inherent combat forms and techniques the style is wild and often unpredictable making it difficult to anticipate a users attacks making it difficult to defend against but at the same time is also rough and can expose fatal openings in some of its wilder attacks compared to more disciplined martial arts that can make it easy to counter. This is mostly for beginner thugs or people who don't truly want a style. For all my cold cut sluggers who just wanna give there opponents a beat down without the hassle of learning an actual style. Ha! This will be common in District 1 peeps who have lived there their whole lives. Skills that are harnessed to a gangster brilliance of sheer brutality. Show us how you throw down.

Mental: Mental chi is the ability that focuses on brain activity and perception.  It dictates the thought process, often reaching higher enlightenments, new thoughts, even patterns, and strategies that may have seemed impossible to comprehend or do before. Such a thing can allow the brain to be comprehensive of ones surroundings, and focus ones senses, and preform complex theories and unlock storage in the brain that was never previously available. this change is not permanent, and is only a temporary burst for a prolonged chi time period.

Often termed as an evil, negative or psychotic energy, which could possibly use the Psycho Drive to channel it. Psycho Power has been described as the corrupted negative of Soul Power. Through its use people have gained a considerable amount of power, expelling all remorse, compassion, and humanity from his soul. This energy also grants him the ability to float, move quickly and mentally influence the minds of other beings. They can also regenerate via the Psycho Drive/Power. (For YMRP purposes this is limited to outside battle use only) However, Psycho Power can exceed the limits of his body, depending ON the type of body it can also determine the "ceiling" of one's power level, explaining increased desires to physically work out and or consistently kill any and everything in sight. There is a direct opposite of this power called The Soul Power is, as its name implies, energy manifested from the soul. In appearance, Soul Power is a kinetic, color-changing energy that people channel from their body and often through materialistic objects, allowing them to control it as a weapon and supplement ones attacks with Soul Power.

HIs origins are as plain as they come. Hazashi was raised in a family home of 4, his parents and one younger sibling he can barely call to remember. He grew up in private school, after private school, often top of his class and a charm to the ladies, but he was always conniving. Always thinking of ways to use other people, including his family to gain personal uprising and get to the top. This attitude carried him through college years, and brought him into the underworld of Kasaikhana. After the Yakuza clans were enslaved, and saved by the legendary Inugami, Hazashi dedicated his clan to this man as if he were a god. Deciding to bring back the era of Yakuza with a vengeance, and in doing so attempting to claim his right at the top of the food chain, and taking down anyone to do so.

~Where you add the Role-play logs you have participated in~

Retrieved from "https://yakuza-mob-roleplay.fandom.com/wiki/Dog_Bite?oldid=51727"
Community content is available under CC-BY-SA unless otherwise noted.