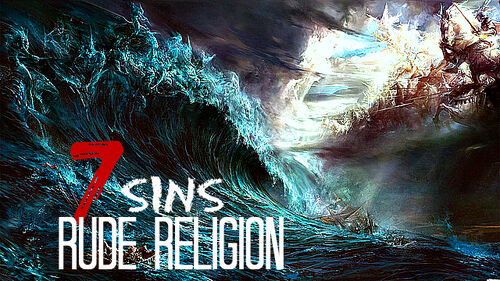 The end is nigh… Bodies have fallen and blood has been drawn… While The battle has been in the red sea, and our combatants have been chosen. Journey through the valley of the Deadly Sins! A team of seven deadly warriors; with nothing but their sins to empower them. Under the hand of Agent Lucifer... He will reveal the power behind new Gods! The birth of a new Beginning.. These seven must learn how to conquer as a team as well as take orders. Poseidon’s army is growing.. But when he leaves his home unkempt, it is the Sins’ duty to restore humanity’s respect Beneath the Sea. The throne of Atlantis is left for grabs, great battle has been unleashed upon the water dwellers. It is the job of the Sins, to stop blood from shedding and turn the people of Atlantis against their ruler and his playmates. Join us on this history in the making.. In the land of Atlantis; A rebel army has joined forces with the 7ins, There leading commander is Harrisgold. He is of Atlantean blood and after the death of his father at Poseidons hand due to fighting for the rights of his people; Harrisgold has made it a mission to avenge him. Poseidons Army is unaware of Harrisgolds relations with the Rebel army; In fact Harrisgolds brother Tridentsnight is the leading commander of Poseidons army. It is only a matter of time. Till, he realizes his brother's betrayal due to this conscious. Harrisgold has offered an alliance with Agent Lucifer. They understood, They had encountered a common threat, who needed to be handled. He had a plan and this required 7 specific individuals…..