this page is under construction 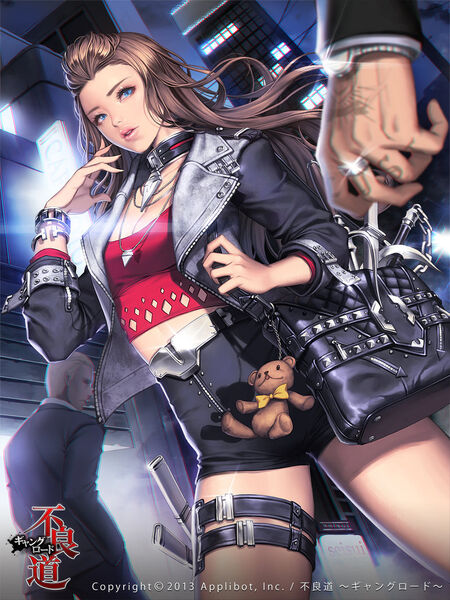 "Even the strongest of opponents have a weakness."

Standing at 5 foot 5 inches is Box Langley. Those bright blue eyes of hers that capture the attention of every man that lays their eyes on her. With luscious rosey-pink lips and a body any woman would wish for. If they want breasts that give constant back pain and men that stalk you endless days and nights. It's not a good feeling. Honestly. Though her appearance changes... every now and then.

Senior ( If we even get back to school )

Hand-to-hand combat (sometimes abbreviated as HTH or H2H) is a lethal or non-lethal physical confrontation between two or more persons at very short range (grappling distance) that does not involve the use of firearms or other distance weapons. While the phrase "hand-to-hand" appears to refer to unarmed combat, the term is generic and may include use of striking weapons used at grappling distance such as knives, sticks, batons, or improvised weapons such as entrenching tools.While the term hand-to-hand combat originally referred principally to engagements by military personnel on the battlefield, it can also refer to any personal physical engagement by two or more combatants, including police officers and civilians. Combat within close quarters (to a range just beyond grappling distance) is commonly termed close combat or close-quarters combat. It may include lethal and non-lethal weapons and methods depending upon the restrictions imposed by civilian law, military rules of engagement, or ethical codes. Close combat using firearms or other distance weapons by military combatants at the tactical level is modernly referred to as close quarter battle.

One must know of all the pressure points in the body, from the weakest to the greatest, in order to perform Chi blocking. When chi-blocking, whatever point the user hits on the victim, though it must be a precise point, it would end up failing, and the victim's body part would be rendered useless.

Ditangquan, (Chinese: 地趟拳, literally "ground tumbling boxing") is a category of martial art that originated in the Shandong Province of China during the Song Dynasty (960-1279).The major characteristic of ditangquan is the ability to perform tumbles, falls, turns, somersaults and aerial acrobatics using those techniques for both offense and defense.Since the time of its origin, this martial art has spread throughout China and has been incorporated into other martial arts styles. Although ditangquan exists as a traditional style, extant versions of it were unknown to the Chinese modern wushu coaches and players of the 1970s; as a result, a "new" version of ditangquan was created based on the tumbling techniques of monkey and drunken styles, but without the characteristic monkey or drunken movements. Today, traditional versions of ditangquan can still be found included as parts of other styles, such as in chuojiao, or as separate martial arts, such as Fujian góuquán (dog style); in the traditional styles, there is less emphasis on tumbling and more emphasis on attacking and defending while falling on the ground. In modern wushu, however, the "new" ditangquan remains a common style used in competition today.

Taekkyeon contains many kinds of techniques, including hand and leg techniques as well as joint locks, throws and head butts. The whole body is used in each movement. Taekkyeon teaches a great variety of kicks, especially low kicks, knees, jumps. The basic steps are geometric and at the core of all advanced movement. All movements are natural to the human body.

The movements of Taekkyon are fluid with the practitioners constantly moving. One of its most striking characteristics is the motion called gumsil or ogeum jil: It is a constant bending and stretching of one's knees, giving the art a dance-like appearance. This motion is also used in the Korea mask dance talchum, so both arts look similar in a way. Taekkeyon does not make use of abrupt knee motions. The principles and methods used to extend the kick put more emphasis on grace and alignment for whole-body strength, as with the arm motions.

In competition, the players must use a foot work called pumbalkki (품밟기) which looks like a dance. The meaning of pumbalkki is "to step the pum". Pum refers to the triangular look of the hanja 品, as pumbalkki has a triangular form as well. The hanja pum means "level" or "goods", but it is used only because of its shape, not because of its meaning.

There are no set forms nor a fixed curriculum within the traditional system. Masters may create their own personalized system for teaching the basic techniques. Taekkyeon uses a lot of high, medium and low kicks. Sweeps with straight forward low kicks using the ball of the foot and the heel and flowing crescent-like high kicks. There are many kicks that move the leg outward from the middle, which is called gyeot chagi, and inward from the outside using the side of the heels and the side of the feet. The art also uses tricks like inward trips, wall-jumping, fake-outs, tempo, and slide-stepping. The art is also like a dance in which the fighter constantly changes stance from left to right by stepping forward and backwards with arms up and ready to guard, blending arm movements with leg.

This weapon is basically named for the windmill shape of the blades and the way it looks as if its spinning while in action. Made from Tungsten, the strongest metal on earth. Within the windmill weapon are 500 needles, coated in poison from a cotton mouth. The slightest prick of the needle can send you into a state of paralysis.

With the braces made from titanium, The Kasaihana Institute of Technology has designed two braces with six blades in each, and at the end of those six blades are magnets that are hooked up to the calling system within the braces. The blades come back by demand, and reload, ready for launch again if needed. The blades are made and molded into three-inches of thickness, and seven-inches in length out of steel.

Basically like the first generation windmills but they have no handle, and are longer and thinner. Also made of tungsten.

The Sylclaine Virus, or S-Virus, is a mutagenic virus created by the Sylclaine Department of Kasaihana's Institute of Technology and Science over 10 years ago. It was designed to take advantage of its mutagenic properties for the development of a new form of biological weapon known as the B.W. ( Bio Weapon ), a living creature genetically modified for use as a killing machine.

The Sylclaine-Virus is built like many viruses, as the virus makes contact with a cell's membrane, it inserts its genetic coding into the cell. The cell absorbs the viral genome into its own genetic make-up, which takes over the cell's functions. The cell begins to produce offspring of the original virus. The new viruses are then released from the host cell and infect the neighbouring cells, which starts the process all over again.

With the help of scientists from the Kasaihana Institute of Technology, they created a second generation S-Virus and Roxanne assigned  Box to be the test subject. Having already the first generation, the second generation Virus made her even more advanced.

From the Second Generation S-Virus, Box has the ability to change into any living thing, but her main focus are humans. Once she changes into a certain person, she has the power to change into them at anytime after the first glance of them.

Fue, meaning Whistle in Japanese, is a sound activated arrow. This sound being just a simple little tune made by whistling. The arrow can move in any direction using the transmitter also used for the mi-bots within Akarui's body suit, and the speed can change with each pitch whistled. Fue can be used about five times, but between those five times that the arrow is used, Akarui is weakened to the point where she can't even see where she's aiming, so she's depended on only her other four senses, but as she uses the arrow five times, she eventually is at a disadvantage to where her senses are inable to be used, rendering her useless until one of the senses coming back after every ten minutes. First sight, then smell, sound, touch, and taste. ( This is not to be touched until further notice )

Retrieved from "https://yakuza-mob-roleplay.fandom.com/wiki/Box_Langley?oldid=39377"
Community content is available under CC-BY-SA unless otherwise noted.