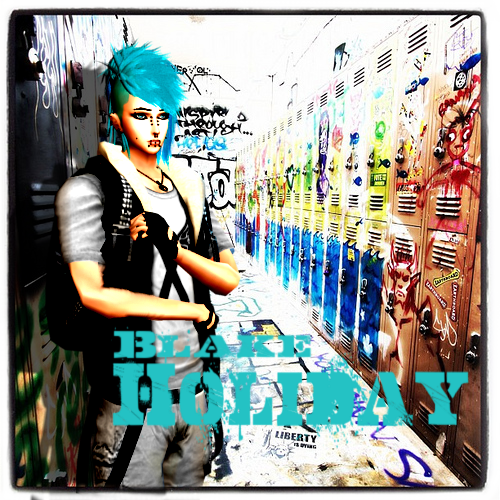 Blake Holiday is everything his name implies. He just enjoys to have a good time. He like to laugh and have fun with almost any situation. He is easy to get along with but get on his bad side and he will let you have it. If he is ever in a bad mood he is not the best to be around. However staying on his good side is really easy to do. As for things he likes and such, Blake is pretty much the type to be up for anything. If he doesnt think he's gunna die doing it then he will try it. This kid enjoys free climbing base jumping and xtreme sports so that should say alot. He is also a pretty awesome dancer (self proclaimed).

Blake can easily be picked out of the crowd. He is the type to regularly dye his hair a multitude of colors (currently neon blue). Also he is known for his facial peircings arround school. Most people when they first see him are shocked by his wild appearance but once they sit down and talk with him they quickly change their views. Other than that his physical form is a little bit skinnier than most however he does have a nive bit of muscle definition. Alot more toned than bulky.

Aikido is performed by blending with the motion of the attacker and redirecting the force of the attack rather than opposing it head-on. This requires very little physical strength, as the  aikidoka (aikido practitioner) "leads" the attacker's momentum using entering and turning movements. The techniques are completed with various throws or joint locks.

Carrys a consealed pistol when not in school.

Tagger is a mythical identity that Blake plays. The stories are of this guy who does what ever he wants leaving graffiti all over the place to show he was there. Sometimes these stories range from harmless stuff like climbing a large building and painting his symbol on it, to holding up conveince stores leaving the place a wreck with paint everywhere. While he is in this persona Blake makes sure never to be directly seen or atleast keeps himself well covered so he is unnoticable. Because of this the few people spreading these rumors wonder if he is a boy or a girl and many have made concept idea for both genders. Some people admire this "Tagger" for just taking what he wants and standing up to the city, while others feel he needs to be taken down to justice. Many people are concerned if he has an affiliation with Heroes Inc. but his actions say otherwise. He seems to do alot more destruction than restoration, and seems to look out for himself rather than for others. Due to his rumor a couple of copy cats of his stunts pop up everynow and then, most get caught quick. The police then usually think they have gotten the Tagger and then a few weeks later he will pop up in reports again. No one knows his true identity and Blake hopes to keep it that way as long as he can.

Paint Bombs: Orriginally this concept was made by him spraying paint into a balloon and throwing that at people, that would thenburst and create a cloud of paint. The use of this was to create a smoke screen however the paint fumes also proved to be toxic if breathed in to long. Now Tagger has gotten creative with making them look like paint balls, as in the ammo for paintball guns. He then can throw these at the ground and they will burst into a cloud of paint about 3 meters in diameter. The paint in this cloud can easily impair people's sight and if breathed to long could be severely toxic.

Grip Gloves: Tagger invented these to help him with his climbing and free running style. These gloves have a type of adhesive built into them that allow him alot more grip than most people. He uses these to scale buildings and climb up more difficult obstacles. He has thought of doing the same for a pair of boots to increase mobility but hasn't had the time yet.

Blake grew up in District One with his "Family". "Family" because he is not actually related to any of them. He just has know them all his life and to him they are his brothers and sisters. They all treated him highly as well, letting him do what ever he wanted provided he worked towards finishing school. They even payed for him to attend school. At first he atteneded the school over in Kingdom district. However as times got harder his family couldn't afford to keep him there any longer and so he was transfered to the Kasaihana HighSchool in District Two. Now that he is there Blake feels confined to his shell again since he doesn't know anyone and is kinda in the back ground. Maybe that is why he changes his hair so much, so people notice him. Whatever it may be Blake is now in the new place and must start working to gain friends once more.

Retrieved from "https://yakuza-mob-roleplay.fandom.com/wiki/Blake_Holiday?oldid=25425"
Community content is available under CC-BY-SA unless otherwise noted.