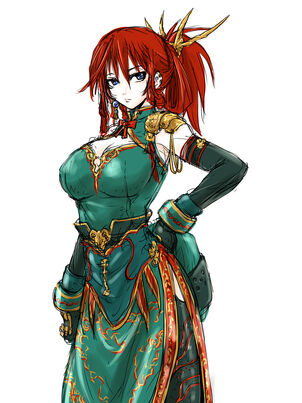 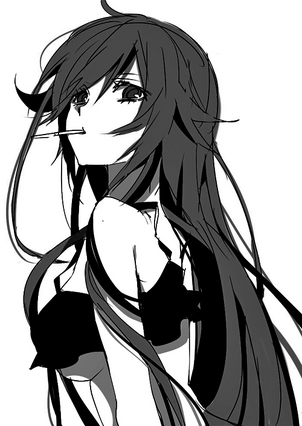 May Yuno
Add a photo to this gallery

The Return of the Ikeda DragonEdit

Yumi slowly opened her eyes and stared up at the blue sky….wait…it was blue. This wasn’t the dark zone anymore. Seagulls screeched and fluttered by and the sound of ocean waves gave her location away…not to mention the wet sand and water pulling up around her as she takes her first breath back in her own realm. Slowly, the redhead pulls up in to a sitting position, blue hues meeting with even bluer sea water…the beach. The same one Kevin had taken her to on their first date….she hadn’t thought about him in just about 100 years. Or at least 100 years in the dark zone…she didn’t know how long it’d been in this realm but it couldn’t have been more than a couple of months. Keyome had taught her much about her dragon heritage along with how to shift in to dragon form…a scary sight to see. A light breeze blows in and distracts Yumi from her thoughts as she lightly tilts her head up to enjoy it. Long locks of red were placed up in messy nature with a dragon claw like hair pin pointing outwards, strands of hair lazily around the frame of her face. Her attire was no longer the usual hakami white pants and green vest though her colors will never change…green is her favorite. Now on her form was an all green Chinese dress with red and yellow silk trims along in special designs. Golden plates were placed on her shoulders in a type of armor and long green gloves covered her hands all the way up to her elbows with long stockings that came up to her thighs with red boots. The only thing really exposed was her cleavage which showed off some red markings on them that most likely no one could figure out what they were. Gauntlets covered her wrists over the gloves she wore that looked like they could do some damaged in a fight….all in all, Yumi looked different. But….everything around her looked just the same as she had left it. “Connor…have you forgotten about me yet?” She fully stands and turns away from the ocean, making her way out of the sand and in to the road, ignoring the crowd of people who had gathered around to see what that intense white light beaming down on the beach was. The same white light she had come out from…her time spent in the dark zone was needed…but now that she was back, she wanted to see what had become of the shenpaku federation and of Connor…she hadn’t seen him in over 50 years thanks to being separated. Keyome didn’t help at all it was as if he wanted to keep them separated and after so long finding a worm hole she was finally home. Last thing she recalled in her time here…Fury was wreaking havoc on the innocent but judging by the looks of it all the horsemen must have been handled. Shame…she really wanted to give Fury some hell wrath but that was water under the bridge…Now then…who to look for first. Connor was most likely at head quarters…but she wanted to see Kevin. Just to make sure he was actually alive anymore. Connor and Kevin were the only ones who mattered to her…She takes a step forward but pauses, suddenly remembering there was one other person she could see to help her fill in some blanks. May. 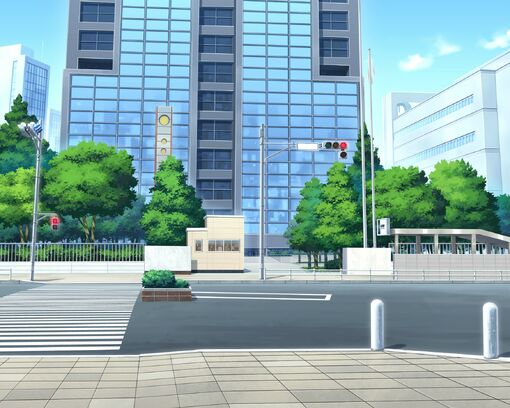 Though it’d been many years since these streets were walked, the fighter still remembered as if it were yesterday…where May spent most of her time as an escort girl. May could tell her what had happened since she’s been gone and what is new on the streets…it was afternoon and people walked about minding their own business. So far nothing odd jumped out at her in the slightest…then a bus stops for people to board, exposing the advertisement of some law firm but with Leons face on it. Lawyer? Since when? That was something that needed to be asked about at a later time. The city bustled with life, cars zooming to their destination all the while Yumi was keeping her eyes on the building coming up. It didn’t seem like much, nothing like a fancy four seasons but not even close to the awful standards of a motel 6 (XDD) in all honesty it wasn’t just a hotel but an escort service…if people wanted some special company it could be found within the building. The idea was pretty genius, hiding a front like that in a place where escorts usually end up going to anyway. A mans hotel room…with the hotel itself in on it, law enforcement could never catch them doing illegal services because the entire establishment would see them coming a mile away. Yumi enters and on luck alone, spots May being yelled at by a man to which the fighter reacts with steam blowing out her nose as her attitude shifts from calm to protective over her best friend. May only winces at the man’s harsh words but it doesn’t seem like shes in any danger of being smacked around as the man stomps off, giving Yumi the opportunity to show face. “Hard day on the job?” She says, scaring the smaller girl as she quickly turns to face her. “Y-Yumi???” May stares in shock, tears threatening to fall from wide brown eyes. “You’re…how…everyone thinks you’re dead….Kevin is…” At that pause, Yumi actually fears the worst but the girl continues with a choked laugh. “He aint doin so good after hearing about you.” So he was alive…that answered only one of the many questions. “Connors alive and he told everyone you were dead for sure. We just…took his word for it. Did he know you were alive?!” May rushes her friend and cries, hugging her tightly. “It doesn’t matter, I’m so happy! I thought for sure I’d never see you again!!” She sobs all the while Yumi said nothing and hugs her, comforting the escort while petting her head with a small smile. “I’m back. I promise I won’t leave again.” May pulls away and wipes at her face, sniffling.

You Have Some Explaining To DoEdit

“Where were you?! What happened?!” To this Yumi looks around for a place to talk to which her friend takes her hand and leads her to the hotel bar, the two friends sitting at a table in the back while May orders them some whiskey. “It’s a bit of a long story…but after Fury killed me I was sent someplace. Another realm I guess…Connor and I were both in there for a while. A good 100 years…” She notices the strange look being given to her and finally she asks. “How long was I gone for?” May shakes her head and replies with an even confused tone. “Yumi it’s been 6 months. You were gone for half a year and Connors only been back 3 days…” 3 days huh? And he told people she was dead…Ah Connor wasn’t known to sugar coat things but it made it easier to just say so after all she hadn’t seen him in 50 years…or…well…3 months in this realm but still. He didn’t know what she was doing or if she was even alive anymore but it didn’t matter, she would find her boyfriend soon enough. “I trained in that realm for so long, doing missions and just…working on my abilities. I finally found out my origins where I come from. I’m half dragon…but that’s for another time.” The whiskey arrives and she examines the glass. “Connor is probably having an interesting time commanding everyone again.” May gives an awkward smile and she eyes the table intently. “Yeah ummm……about that……The shenpaku federation is sort of…kinda….a little….not there anymore?” The glass gets slammed down and Yumi frowns, her eyes narrowing into slits for a brief moment. “What do you mean?” “Well when you and Connor died they just fell apart. The city fell apart but the horsemen were defeated and things just changed…Josh tried his best to keep it all together but he isn’t exactly Connor Ryoji and then the banks came for everything, it’s all gone. Connor found out and now hes starting over.” So things had changed, their world was different now… “Kevin isn’t doing so good either. He took your death pretty hard. And then he found out about you and Connor and well…” Yumi frowns at this news and instantly downs the whiskey glass with ease, her throat burned slightly but it wasn’t anything she wasn’t use to considering the flames that she can bring out. “Let me guess…they fought.” May nodded weakly. “I haven’t seen Kevin in a while but the streets know what happened, why it happened…Kevin almost killed Connor.” At this Yumi looks surprised. “What?” “Yeah! I’m just as shocked as you are…He was so angry or so I heard I mean the damage they did. Connor is alright but umm…rumor has it hes looking for Kodi.” His old girlfriend? Yumi quickly stands up and this time she looks heated. “That idiot! He’s back 3 days and hes already given up on me?!” No….it was more than 3 days…she hasn’t seen him for much longer. But still…she never stopped thinking of him. Their 50 years spent together they were happy and it was nice….but now that he had returned to this realm the truth was Connor and Kodi still had things to settle between one another. With him thinking she was gone he might…. “Do you think hes going to get back with her??” May read her mind and Yumi couldn’t help the sigh of defeat. “I couldn’t blame him if he did. Kevin and I…Kevin loves being a hero more than anything. He loves it more than he could ever love me and I don’t blame him for that. Being gone for so long I started thinking bout everything and with all that time you see whats important….whats really important.” She slowly sits back down and starts playing with her necklace, the one with an emerald stone held on to by golden spirals. May caught this and looked down a little sadly, she felt bad for her best friend… “Did you guys…get married??” Yumi laughs at this and smiles at the thought. “Connor Ryoji? Proposing? Not even in a 100 years…literarily! Maybe if we were there for a hundred more he might have CONSIDERED the idea. But that’s what I love about him…” May stares, shocked at the L word but says nothing to her, simply shrugging with a grin. “Well then fight for your man!!” At this Yumi takes another drink and shakes her head. “Connor is a grown man and if he chooses someone else all I would want is his happiness. That’s what being in love with someone is about…putting away your selfish needs for their own.” “Wow you’ve…changed. What happened to my tough socially awkward Yummers?!” They both laugh and the fighter sighs again. “A lot has happened but I’m still me just…a little smarter about how things work. Connor doesn’t know I’ve returned and I guess he needs to sort through some things first. As do I….” She looks to May in all seriousness. “Where is Kevin?” ……………..

Retrieved from "https://yakuza-mob-roleplay.fandom.com/wiki/Ark_23_Episode_26:_Back_from_the_Dead%3F_The_Ikeda_Dragon?oldid=41838"
Community content is available under CC-BY-SA unless otherwise noted.