(After the Plot with the Black Ice Gang) 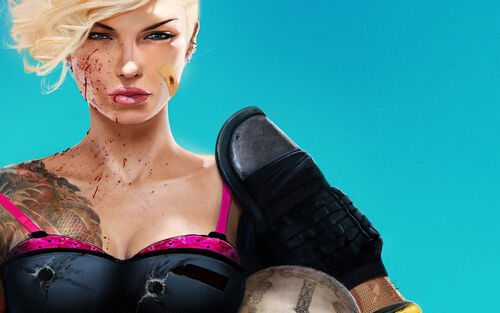 A Not So Good Morning.Edit

Kodi would open her eyes slowly...as she noticed a patch full of red hair.. and a broad muscular body... as both were entwined with one another... her blue eyes widened.. while screaming loudly.. she tried to stand only to feel her legs numb... The blonde beauty was bare naked.. her neck up and down was full of hickies... as she seen them.. they were dark as ever.. her right eye twitched... as the body was entwined in the blanket... she gritted her serated teeth..pulling off the blanket only to seen Jayce.. She paused as she would pinched the shit out of his nipple waking him up."O-OW WH- Oh hey babe-" Kodi was in awe shocked of what he called her.."What? babe... What the fuck- WHAT DID YOU DO!" Jayce only laughed as he sat up... as he sat infront of her.. pulling the agressive shark toward him as she squirmed giving him a glare..."Last night was pretty hectic at first.. well it was my fault really..You came home really late.. and you were high and I got p-" "You act like were a married fucking couple ! The FU-" He placed his finger on her lips.. to shut her up... adverting her eyes toward the mirror.. she noticed a bruise mark around her neck... raising her eyebrow..pulling away.. as she tried to get up.."Alright this is wrong Jayce. I-" He inhaled sharply.."There you fucking go saying that shit!" He then pulled her up slamming her really hard rather violent against the ground.. pinning the weak shark from last night.. Her eyes stayed shocked.. for a moment... meeting his death glare... "I already told you.. I didn't care. why do you have to be so difficult...?" The female looked over to the right..."Well we fucked there we have it.. I'll tell you the whole night when you fuckin didnt come back for days.. what does that make me fucking think blondie!" ... She gritted her teeth as she turned to face him.. spitting at his face.. giving him a glare.."I told you not to fuckin call me that!" She tried to lash at his face with her right fist in a quick moment.. though he was too fast for her.. due to jayce's enhance speed... he grappled his right hand on her wrist. slamming it back down onto the ground with such force.. breaking almost the wooden flor beneath it.. Thus as he pressed his broad weight on her body she couldnt move.. she just glared at him.. while she tried to lash at the red haired male... with her serated teeth.. before.. incoming with a loud slap on her right cheek.. literally knocking the two teeth out her mouth.. Nathan soon came knocking on there door.."Kodi-kinz you alright in there!?" the flamboyant man hearing a commontion he was rather worried.. since last night.. due to the name calling.. the two weren't even together.. yet he was acting as if they were... Kodi and Jayce looked over at the door.. as she tried to change the tone of her voice."Everythings fine don't worry Nathan! Its just ruckus Hah..." Nathan wanted to barge in but.. he remained himself an walked back into his room from the underground club...Jayce stood off of her as he leaned on the bed... taking out a cigarette.. as he lit it up.. inhaling the smoking.. before taking it out her mouth ah exhaling...as he soon started to speak about last night.."Before we go.. and actually find some fuckin crime.. Ima tell what happened last night .. But your gonna shut your be mouth.. because if you tell somebody .. it will make you feel degraded.I already can read you like a book.." Kodi looked away as she stood silent as he began to the about last night.

. ~Flash back to last night~ The blonde had been coming home high off some meth and thc.. she swayed around.. within the underground.. she had waved at some of the newcomers.. as she soon barged inside the room where Jayce had been sitting at waiting for the drugged up party girl to come home.. she had cocked an eyebrow.. dropping her lighter an cigarette box..Jayce had seemed to have a bad demeanor around him.. "So you finally came home.. its been four days.." Having her bad attitude toward the boy..."And? your not my man..I learned long time ago that I will be a-" "..And you really think on what you say that I actually care.." The blonde stood silent while she would turn around,little did the two know that Coco and Nathan had been watching an listening with a creak of there door.. while Kodi's room had been open still.."Tch! what the fuck ever i dont have to hear this.." Stumbling around as she turned her way toward out her room..before within the quickness.. pushing up against the hallway wall.. she gasped as she turned around..having a glare within her high state eyes.."Get the fuck off me Jayce." His piercing green eyes stared back..giving a deadly glare at the woman he had been obsessing all his life.. but he didn't want her near anyone.. it seemed.."What are you gonna do huh?!" The blonde smelt the liquor amongst his lips... he grasp each of his hands around her soft neck.. giving it a tight grip literally choking her.. 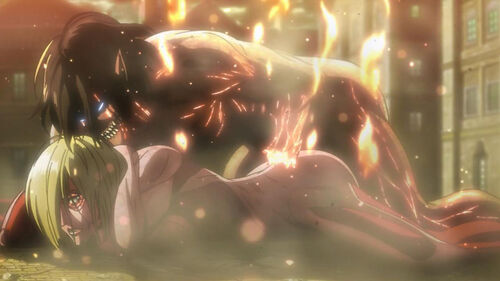 being off guard.. he shook her.. bashing her back against the wall. she would soon use the strength within her legs.. kicking him away.. as she touched her neck.. THe flamboyant soon swung the door open.. glaring at Jayce... with anger and disappointment.."Aww c'mon Nathan we were just playing right Kodi?!"  Coco soon would try to comfort the blonde before she had stood straight up.. rubbing her injured neck.. there was already bruising around it.. finger marks as well.."Yeah.. Just playing.." His honey brown eyes widened... this wasn't like Kodi... why would she let this guy hit her...Watching his what is close to him as a daughter...she went inside her room while the red headed male soon slammed the door followng behind her...With that Jayce soon stood behind Kodi.. while she gazed at herself in the mirror.. before he spun her around.. slamming her against the mirror.. he pinned her.. planting a hard kiss on her lips.. though the blonde was motionless to his kiss.. she didn't want him anymore... but she then smacked the shit out him.. while grappling her arms around his neck. with hatred.. as he force her thick legs around his waist... he soon pulled down his jeans and boxers... as he ripped her tights inbetween her legs.. only exposing her pussy .. he soon.. brought his belt.. as he bounded her wrists up so it expose her body fully.. he checked her up and down.. as the female looked away... thus as she adverted her eyes..Jayce would rub his already hard shaft... against her plumped pussy lips.. though she wasn't wet.. this made him angry... while pulling her hair making her gaze at him..." You little bitch ! Whats wrong you dont wanna fuckin get wet now HUH?" Thus he spat on her face... Then he did the worse he could do.. he thrusted inside her dry... her blue sedated eyes widened.. struggling against her bounds... she let out a painful cry... though due to her sadomasochism... her juices began flowing as blood dripped down due to him going in hard an dry.. he soon made the speed of his thrusting atleast 155mph... Kodi screamed loudly.. as she soon felt her having orgasms within 10 split of a second... though her eyes watered as tears streamed down her face.. while begging him to stop.."J-JAYCE FUCKING STOP!!" She didn't like this, but he kept going.. he soon would lean over.. latching his lips an teeth onto her neck. sucking hard... as he started to form a large hickey.. he continued down.. giving her atleast 10 hickeys down.. Kodi soon pressed her weight onto her legs.. causing the mirror to tip forth.. causing the two.. to fall down onto the floor... as the glass of the mirror shattered ontop of them... though he kept on going... her legs were going out.. he pushed off the mirror stand off them.. while she soon gave in... as her eyes watered.. her lips soon met the teen males lips.. biting his toungue hard making it bleed... before be pulled away lowering his head.. to bite hard against her neck.. as he bared blood.. from his bitemark.. with hearing her scream.. while she began to flood his cock... with her juices.. climaxing hard... he soon pumped inside her hard... his hips still going before.. slamming his cock inside her one last time.. forcefull cumming inside the blondes womb... he soon threw her on the side as if she was nothing.. not cuddling with her at all.. though he did pull a blanket over the two... Kodi still up.. she layed there in a fetal position.. while her eyes were filled with nothing.as the Martyr within her eyes.. soon glowed within the night.. before she fell asleep... ~ End of FB~ 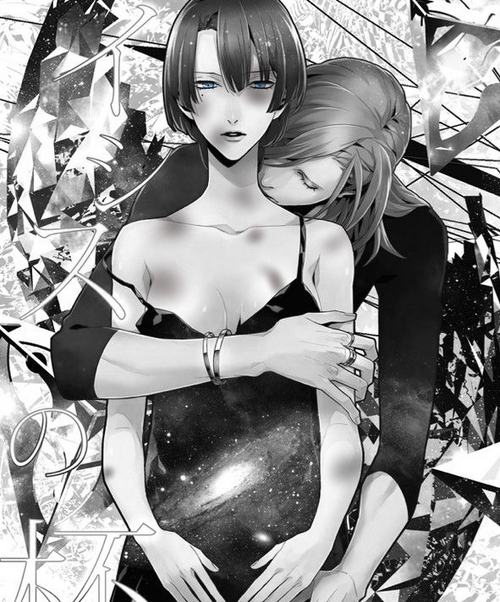 Kodi eyes widened.. as she soon stared at him... with hate.. and despair... Jayce.. only laughed while putting out his cigarette.."Though now you belong to me.. and your not getting near anybody.. without me being there.. Thus we will soon.. become Vigilantes.. you know protecting the city and bull shit like that...So.. are you with me BLONDIE?" Hearing him talk made her skin crawl.. though dumbfoundly.. she nodded slowly.. agreeing.. he stood up taking a handful of her hair.. pulling her up roughly.. as he kissed her bruised cheek.. "Atta.. Girl.."

Retrieved from "https://yakuza-mob-roleplay.fandom.com/wiki/Ark_22_Episode_25:_A_Love_that_is_not_Wanted?oldid=39767"
Community content is available under CC-BY-SA unless otherwise noted.