When the lights went out throughout the area and Ginji rushed in to snatch up Kodi. Another explosion would have went off right on stage where the Water God stood. Stopping Ginji in his tracks. But who had been behind this explosion? 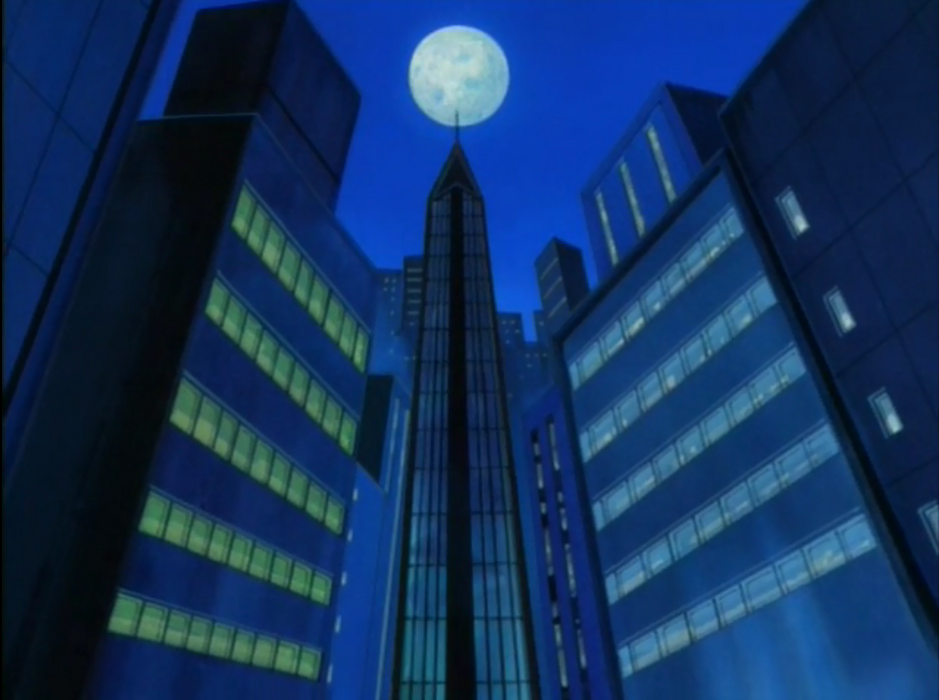 During the Black out... Heroes Inc Tower...

Mad Dog sat there... with a scowl on his face as he stared down at the concert set to blaze. " Foolish boys, kidnapping that girl wont get you any richer. Isnt that right...? Leo? " One of Ginji's friends and lackies would have been dead at his feet, beaten to a bloody pulp, a teenage boy, made into a killing pleasure. Mad Dogg's killings had become more frequent, more random, more... violent. A pole sat impaled within the young man's head as a result of this. He had milked this young man for information, and used Ginji and Kin's plan's for his OWN plans.

" If you want money, your going to have to destroy things in your path to obtain what you seek... " He said taking a few steps off elsewhere. He made his way over to the edge of the building before he turned backwards and made his way over to the door way. All of the Heroes for hire guards were knocked out as he walked through the halls. His handy work no less. his long rusted over trench coat flushed over the ground in a long sweeping motion. And as he pulled around corner... his apperance had changed. He had changed swiftly finally tossing off his bum disquise to show what he truly looked like under his cloaking device. He took a seat, his long flowing green hair shuffled under his top hat like attire as he tilted his head left to right at the nullifer. His crip black suit straightned down and fitted perfectly to match this mysterious devil. 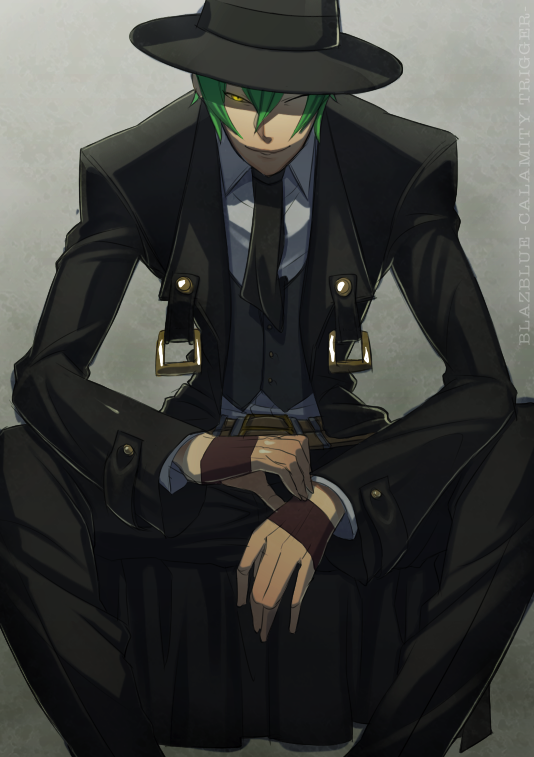 Mad Dogg's true apperance
Add a photo to this gallery

Yet... even though, something was odd. His eyes glowed with the same bright golden glow that appeared so much amongst the Tasanagi line... A strange oddity indeed...

His head tilted high as he made his way down to the nullifer. " So here it is... the weapon that was able to shut down the horsemen in there prime. " He went in, holding up one of the heroes for hires hands up to the hand piece as he caused the lock containing the nullifer to shut down to the finger prints recognition system. " Good... good..." He said dropping the glove and reaching over to snatch up the Nullifer. Mad Dogg had been wearing a digital EMP cloaking device. No signs of him digitally would have been recorded within the system. " The Zone Nullifier..." He said starting to read outloud. " Has been described as "the universe's most devastating weapon." As such, the Zone Nullifier has the ability to completely and utterly eliminate any target the wielder chooses (through locking onto one's omega gene by voice command.), and—if the wielder's mind isn't powerful enough—the Nullifer will reject said person, and fail in terms of usage. In the hands of a being with an extremely powerful intellect, such as Ochigi Ryoji... or this... Michiko Tasanagi, the Zone Nullifier can shrink down anyones power into nothing, surpressing the omega gene to non-existance. Making someone more then human... not even a peak human trait to defend themselves with. While its origins are ancient and were previously unknown, the design was found by Michiko during one of her trips around the world... however the power, was delieverd by an unknown source. And something with this maginitude cant be from my world... this is... something different..." 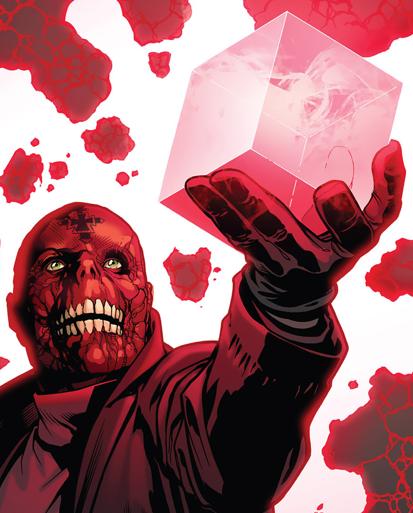 With the Nullifer in hand he made his way out of the room when he finally stopped by a male cloaked in all black. But Mad Dogg had known and had been well prepared, reverting back to his bum like apperance." Just what do you think your doing with that cube...? " He said as stood there, eying Mad Dogg down. " Why, I'm going to kill a god of course... I've been tasked with alot of money to see to this. " He said smirking. The man in black had been Ayperos. Leader of the Heroes Inc. Black Parade Unit. 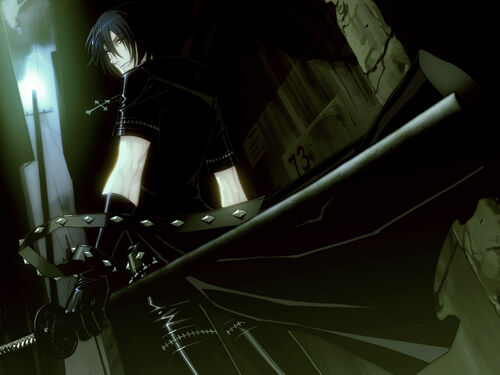 The Black Parade is a secret underground stealth unit formed by Ayperos Akiyama during the 10 long years. These are the classic "Unsung" heroes, who do the work completely in the shadows of kashihana city. Weather it be in broad day light, or blackest night, it's very rare to see one of these covert agents stealthing around either disposing of or cleaning up messes that KPD leave or neglect, not to say Colt hasn't been on his game over t he course of years. EACH and every single  member of the Black Parade is an absolute and undeniable master of all things stealth and stealth releated tatics. They come in unseen and leave the same way, their task range from cleaning up/collecting evidence at the end of unsolvable or odd crimes that can't properly be explained. They also masters in assasination techniques (only when nessecary, by no means will this be a continuous or reocurring thing) theivery, retreval and information gathering. This is also aided completely by their stealth suits. Their suits standard gear is all black, equiped with a microweave mesh of Kevlar, Nomex, and False Ragnainium (about as hard as Tungsten Steel), allowing for bullet durability up to, 45 cal's & Up, thought the suit could viably resist the gunfire regardless, optic & static camo and and lightweight enough for them to move like olympic acrobats, leaping 15+ feet into the air in a single bound, landing with not even a single noise. Their suits are noise resistent to boot, fully insulated/fireproof, with thermal cloaking and linigs of lead to prevent interearence from X-ray's with built in Chaff frequencies int he forehead/cowl area of the outfit to prevent motion detection. The ocular portions have built in cameras, that take pictures on mental command, and they're equip with basic detective, escape gear. They are not ones for confrontation, but should not be underestimated by any means in CQC.All of this in conjunction with Ochigi Ryoji & Akiyama Industries, whom have worked together to create the perfect task force. The number of members to this day is only known to the heads of Heroes Inc. as people who have seen them or glimpes usually see at the most 3, when usually a squad of 50 is dispatched for regular recon.

Ayperos stared Mad Dogg down and he scanned over him with his deadily eyes before he tilted his head up. " Hmph... I have no use in that item. Red Dawn can do without as well. Take it foul creature... and clean yourself up. " He said tilting his head up. " Your apperance.. sickens me..." Ayperos said turning his back on Mad Dogg. The Murderous Dogg smirked in approval as he made his way out of Heroes Inc. " Things have been... looking up lately..."

The KPD had rushed in the area and had already secured Kodi, a tip had been sent that she was getting ready to be arrested and the authroires were there to shut it all down. Kin would have quickly met up with Ginji who allowed them to make there grand escape away from the area so that they wouldn't be arrested. Meaning the Black Ice Gangs first attempted at a big get rich quick scheme had ulitmately failed.

Retrieved from "https://yakuza-mob-roleplay.fandom.com/wiki/Ark_22_Episode_17:_Nullifying_Boom?oldid=39178"
Community content is available under CC-BY-SA unless otherwise noted.