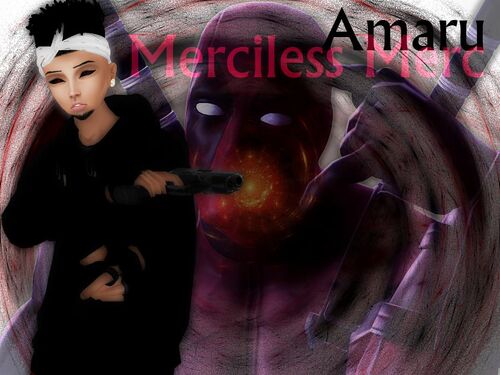 When you think of the word "unpredictable", Amaru may just be the first thing that comes to mind. He has so many personalities that he could never pass a psychological test. The man is quite goofy, he can't help it though, an accident from his childhood where he bumped his head has caused a form of "mental retardation" in him. Now, you wouldn't be able to tell at first glance, but after spending enough time with him, you would see how "off" he is. He also is quite aware of his surroundings, though no one ever listens to him, he's constantly noticing the forces of his world controlling him and just about everyone else. He tends to break the "fourth wall" all the time, pointing out the flaws of his own actions sometimes, and making fun of the "people behind the camera".

Now, imagine this: a half "Japanese", half Black man, barely under six foot with a strong, muscular build? That's basically the sum of Amaru's appearance. His skin almost at a light tan resembles that of the Egyptian Gods. His facial features consist of an average sized nose, a set of full, pink lips, a patch of chin hair, and a pair of red eyes with black irises. His eyes are due to a "birth defect" that also go with the powers he had been born with. His hair tends to change styles often, the majority of the time, you'll see him rocking a high top fade with his hair twisted. Some times, he'll take the twists out and pick his hair out so that his hair will look like a normal flat top. When he wants to do something formal, or put on his mask, he puts his hair in French Braids. From the neck down, his body resembles that of a male model, the extended pecs, the bulgy arms, the perfect six pack, and basketball player sized hands that properly support the power that he packs.

Clothes wise, Amaru is very fashion forward. At times, he dresses ahead of his time, predicting the next trends before you see your favorite rapper wearing the clothes. With the money he makes with his Mercenary work, he funds his "costume". A red and black full body suit with a mask attached to it with no eye holes. Instead, the "eyes" of the mask are high tech sensors that help him scope out his targets. He keeps his twin katanas on his back in their sheathes, two desert eagles on each thigh, and a belt filled with grenades.

Base Style: Ninjutsu is a martial art that focuses on stealth and prosicsion. It is both an armed and unarmed martial art. Ninjutsu is an ancient martial art that's been integrated into countless martial art styles, mostly armed martial arts, and the traditional teachnigs of Ninjutsu have not been used in combat in centuries. The Kuremisago Clan has continued teaching the traditional techniques and have passed them down from generation to generation, doing so has given them a full understanding of Ninjutsu and the human anatomy, and as such they have become a Ninja lineage with access to unique fighting abilities. For those who want a bit of finess in there fighting, wanna be flashy and wanna kick ass. In order to have this style a master or someone had to teach you this. If you have this style and dont state who was your master who taught you these ways then you'll be asked to fix it.

Flow of battle: The word "Dou" means motion. A Dou type martial artist uses his/her anger to exceed his/her limits. As such, they tend to be aggressive in combat, and very rarely strays from the offensive. At some cases, they are even bestial, as seen with Miu and Kisara, after receiving intense emotional pain and frustation, respectively. Users seem to rely heavily on instincts and brute strength when fighting. Dou fighters have a technique for reading the opponent's movements which relies on exciting themselves that's an equivalent to a Sei fighter's Ryusui Seikuken. A Dou fighter focuses on making their ki "explode" after channelling it through a target to deal damage. According to the manga, Apachai, Sakaki, and Miu are all Dou types. It appears that Dou types are more prone to move onto the path of Satsui no Hadou(Dark Energy), because they fight with anger, and can hardly control themselves when fighting. However, Keyth Tasanagi, Keyome Tasanagi, Drankin and Zetsui Ryukiri. Have all shown signs of control with there dark hadou despite its dark nature.

Eighteen years ago, a rapper by the stage name of X-Cessive Assassin came to Japan on tour, where he met a beautiful woman by the name of Junko Katashi. Her beauty had been nothing less than alluring to him, and she had to be his. But, in order to get to her, she made him promise his soul to her, and even though he didn't fully understand the promise, he understood that he'd be getting in her pants, so he took advantage of the situation and agreed. By the time he finished making love to her, he noticed all of the strange, devil-esque portaits and paintings in her house and decided it wouldn't be wise for him to stay there with her. But, when he tried to leave, he felt a sharp pain in his chest, and he suddenly collapsed. Dead on the floor, right before his show, the woman had escaped the house.... Turns out it had never been hers in the first place, she had tricked him into supplying her with his seed in order to breed her "perfect" child. She herself was a demon sent from the depths of hell.

Her womb developed quickly due to the fact that she was a demon, and her "perfect" son had came out with so many flaws, she had no choice but to throw him out, she couldn't disappoint the rest of the realm with this child. The boy had gotten picked up out of the trash can by a Japanese couple while they were out on their daily jog, and they quickly took a liking to the boy, so they adopted him. Naming him Amaru, since he was obviously partially black, they had set him up for the rest of his life, giving him all that they could since they didn't want him to feel strange for being different.

It was obvious to him and everyone else though. During his years in grade-middle school, he physically excelled over all of the other children in his classes. Academically, not so much. Turns out, when his mother threw him away, she had caused brain damage to the boy. But, he adjusted... They placed him in "special classes", where he continued learning, trying to keep on adjusting. By the time he got into High School, everyone could tell how strange the boy was, but no one bothered him, they left him alone and he finally got into the normal classes. But, while in school, he noticed what all of the other kids had, they were happy and they all had their money... He didn't have either. He didn't feel like he belonged, and his family was broke. One day, while out and about, one day, someone who had noticed his talents offered him a job... Not a normal job though... The person offered him over a thousand US dollars to kill someone, equipping him with his own costume and weapons... Even giving Amaru a person to teach him the ropes. The result?

"That's for you son a bitches to find out!"

( THIS CAN ONLY BE EDITED BY AN ADMIN but your more then welcome to take a look. )

Retrieved from "https://yakuza-mob-roleplay.fandom.com/wiki/Amaru?oldid=39108"
Community content is available under CC-BY-SA unless otherwise noted.